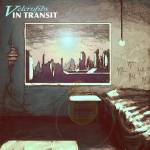 refined their sound and bumped up their creative stock.

Here is a track-by-track play of In Transit;

The intro to the album begins with some sad guitar picking. The vocals are melancholic, to say the least. The lyrics, from what I can depict, tell the tale of someone who is a “freak” to others, hence the name, Elephant Man. A lot of promise ends up falling short. The song is mediocre at best.

Track Two- Roswell, 1947
“Roswell, 1947” is the latest single from the Fibs. The lyrics revive feelings for a former lover. I could only describe the music as sounds of loneliness. The guitar is soothing and almost puts the listener in a lullaby-like trance. I also appreciate the use of cymbals, as they provide a symphonic undertone.

Track Three- Aqua Exhibit
The intro starts out with kickin’ drums and an extreme, bluesy guitar rhythm. My interpretation of the lyrics is that the narrator is losing himself and everyone around him. Near the middle of the song, a breakdown ensues with a combative, yet harmonic duet between drums and guitar. Both instruments are persisting to be heard (kinda like the narrator). I feel that the drastic change in tempo could be a metaphor for the narrator truly “breaking down”. Also, the vocals during the breakdown were recorded with a toy megaphone, so how cool is that?

Track Four- Sleepwalk With Me

For this round, the Fibs provide us with a leisurely-paced jam. They invited former AQ student, Maggie Wissman, for a few lines of vocals. This is definitely a song couples could slow dance to at the high school formal. It’s different and it’s charming, compared to the normal indie sound the Fibs go for. Personally, I feel Wissman’s vocals could have been highlighted more than just the background of the chorus. Needless to say, it’s still a bop.

If you’ve ever been to a Fibs show, you’ve no doubt heard this little ditty. The tempo for this one is upbeat, somewhat peppy. The vocals are enticing with high notes dipping in and out, containing a classic “Whoa-Oh-Oh” line. This track is extremely catchy and will be stuck in your head in no time.

This song is more instrumental than anything else. At the beginning, the limited vocals transition into spoken poetry and then into a repeated chorus. It’s interesting to listen to, but kind of boring after a while since there aren’t anymore lyrics to sing along to.

The first thing I noticed about the final track is the guitar seeming to be stuck in reverb, trying to dominate the singing. It starts out slow and then a breakdown emanates halfway through where the singing turns into yelling, but it’s not unappealing in the least. Another tempo change towards the end of the song gives it a circus theme vibe. The song fades out with the clinking of silverware and fine china in the background amidst alluring, soft voices.

All in all, I would give the Fibs three and a half out of five stars for their newest work of art. There are some songs that just fly under the radar with so much unused potential. The continual use of the same lyrics and riffs can get wearisome after a while. However, there are the numbers where they took risks to change the sound and it worked marvellously. Give the album a listen; support local bands.