The Aquinas Cheerleading team is gearing up for another important season. Backed by coaches Emily White and Amy Stover, the team is looking to provide some school spirit while also taking a stab at the National tournament.

Last year, the team was struggling to find participants, thus limiting the amount of routines they could perform, but should be in the clear this year due to an abundance of newcomers.  This year’s team has 19 rostered members with a handful being first-years. Returning for the Saints are seniors Jackie Bourdon and Brandon Harris, and sophomore Katie Hann. While the team is young, everyone is looking forward to the season.

“I’m very excited to start our competition season,” said first-year Hannah Kidder. “I’m excited to see what we will be able to accomplish from all of our hard work.”

The Saints kick-off their season on October 29 when they perform during the Women’s Basketball game against Bethel. On top of performing during the Men’s and Women’s Basketball games, the team will also be partaking in competitions. Their first competition of the season takes place  on January 24 in Concordia, MI. In the meantime, the team will be perfecting their skills through countless hours of practice and putting on a couple cheer clinics for some of the local schools.

While most of the team consists of first-years, many might be shocked to find out that most of the members have little to no experience cheering. Don’t let their inexperience fool you, as the coaches and members are working diligently to ensure great performances.

“Cheering for Aquinas is special because I was given the opportunity to work alongside some of the best athletes and friends the school has to offer,” said first-year Josh Atherton. “Coach Emily and Coach Amy push us to do our very best and helped me realize I have talent for a sport I never imagined myself playing.”

First-year Dominique Tomlin also chimed in saying “This is the first time I’ve ever done cheerleading, unless you count sideline in early middle school (which I don’t).”

Aside from their honesty, the team is also made up of some very interesting people.

“Well, an interesting fact about me would be that I did ballet for 14 years previous to attending Aquinas,” said Kidder. Atherton commented saying “Before I was a college cheerleader, I was a varsity swimmer in high school for three years.”

Make sure to come out and support your Aquinas Cheerleading team as they take the floor during the Men’s and Women’s home basketball games. 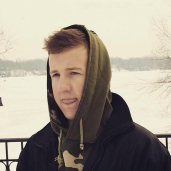 Taylor Hodges is a senior majoring in Sport Management/ Business Administration. He is the sports editor for The Saint and interns with the public relations department for the Grand Rapids Griffins. He hopes to one day break into the hockey business as a General Manager, but until then, encourages you to follow him on Twitter and download his mixtape.