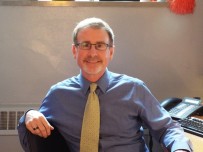 Professor of Communication Dave Weinandy is known around campus as an invaluable resource for his work ethic, his informative classes, and his fashion sense.

The Ohio native has certainly left an impression on Saints since joining the Aquinas family in 1991 as the Director of Campus Life. This impact is exactly why two former students were inspired to cultivate a student leadership scholarship in Weinandy’s name.

After meeting up for a cup of coffee, Aquinas graduates Joey Bishop (Class of 2008) and Josh Marko (Class of 2010) came together to express their immense gratitude in the form of this scholarship. The coordinators explain that the scholarship will become available once it is fully endowed, an anticipated 4-5 year process. The goal is to award $30,000 total, which would be a scholarship of about $1,200 annually.

“There is a certain sense of duty,” said Marko. “We have never been able to express the true amount of gratitude towards Dave. This is was simply an attempt to sufficiently express that gratitude, even though it feels as though it could never be fully articulated.”

The two alum have nothing but good things to say about Weinandy.

“He fostered my love for higher education, and developed my internal passion for learning and information,” said Bishop. “Besides my parents, no one else has had a more dramatic impact on my life.”

This scholarship information was unveiled to Weinandy in the form of an announcement at a surprise party held earlier this fall.

“They tricked me,” said Weinandy. “As I was the former Director of Campus Life, I was under the impression that this was a student government and cabinet reunion. What I didn’t know was that there was a luncheon in the next room.”

For those close to him, they assess that Weinandy was truly stunned.

“I believe Dave was genuinely surprised the day of the scholarship unveiling,” said close friend and fellow Communication Department colleague Dr. Penny Avery, who has worked with Weinandy for 21 years.

“ I woke up that day feeling like it was Christmas morning. I was so excited for Dave and for the alums who had planned the event and originated the idea of the scholarship.  Dave is so deserving of this scholarship. I am proud to call him my friend. I hope the College realizes how blessed we are to have him.”

Weinandy explained that the scholarship is still a work in progress and he stressed that he wants to get more involved in its development.

The rest is history.

Abigale Racine is a senior studying English, with a focus in journalism. She is the Culture Editor of The Saint and does some freelance work on the side, when she isn’t soaking up the scene that is Grand Rapids.