A lack of sportsmanship

“Be humble in victory and gracious in defeat.”

This was posted below the scoreboard at my high school, and it is something I try to live by, no matter how hard it is. When playing sports, it is hard to live by these words. When playing something of such a competitive nature, our emotions sometimes do get the best of us. Being an athlete in high school, I know how this feels, both on and off the field and the court. It’s okay to be competitive, it’s what makes sports great. There is a difference, however, between friendly competition and acting in a manner that is demeaning to another player/team.

At the basketball game on January 20, I witnessed this behavior firsthand. One of the first things I noticed was that students were messing around during the national anthem. I also heard very obscene language directed toward the opposing team and the referees. I will not post the details of what I heard and was said in this article due to the inappropriateness of what was said. I will say, though, that it was bad enough to make me leave the game early, which is something I never do.

When I decided to come to Aquinas College, one of the deciding factors was the community and the friendliness that everyone displayed. This show of sportsmanship totally went against everything that this college stands for. Frankly, it was just very childish and immature, and there isn’t a place in sports for that kind of behavior. Sports are a privilege that we have to watch, and acting in that sort of way totally ruins it for everyone.

We’re Aquinas College Saints, and we should be proud of it. We should carry ourselves in a way that shows this. Just because we are at a game, does not mean that we have a right to not act kindly and with manners.

The reason that I wanted to write this article is so that maybe others can think about their actions, how they are making you look to those around you, and how it represents your school and the sports team you are watching play. Knowing a good amount of Aquinas students, I know that this is not characteristic. That doesn’t change what has already happened, however, and I hope that maybe students will think twice before degrading other people and a different school in the future. 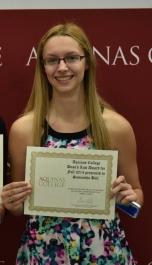