New to Aquinas, the Women’s Hockey Team has enjoyed getting their feet wet in unfamiliar territory. Each of the players has a hockey background, and all are thankful for the opportunity to play at the next level.

With a small number of players, the women’s hockey team has faced a few challenges. They only have 11 players, and six are on the ice at all times. Injuries make practices and games dicey, but the team has buckled up and fought through the rough spots.

It is always difficult to start a team from scratch.

“Our team’s greatest accomplishment thus far has been forming from basically nothing. We are a small team, and most of us have never played together before this year, but we have all banded together to form a team that works so hard everyday to improve,” says sophomore Katelyn Graczyk. “We have not given up on any challenge we have faced over the course of our first season. I am also very proud of my team for that.”

It is positivity like Graczyk’s that proves adversity can be overcome.

Positivity is how the team truly began. First-year Maria Manko recalls being recruited for the team. She mentions, “I chose to play hockey for AQ because of the opportunity I had to be a part of a starting program, and because the coaches and people I had talked to about playing made it seem like it was going to be an amazing experience.”

Manko is grateful she made the decision to play for Aquinas as she happily adds, “Now that we are halfway through the season I can say that, so far, it has been one of my most cherished experiences.”

Having a quality experience while playing for Aquinas is a common theme among the women’s hockey team. Despite their first year status, the team is second in the CCWHA2 and seventh in the ACHA West Conference, which helps to create outstanding energy for the team and fans alike.

The women are also proud to be a part of a program that takes pride in their team. First-year Sydney Johnson respectfully notes, “In hockey usually only the guys teams get all the attention and support and the girls teams are just forgotten about. Playing on a team at AQ is completely different than any other team I’ve ever been a part of because the people here actually care about our team and take pride in what we do.”

The Aquinas Women’s Hockey Team has already made a name for themselves. It will be enjoyable to watch as they continue to tread through the unfamiliar land. 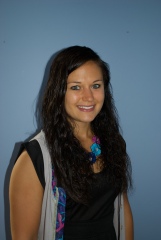 Zoe Harmon is in her final year at Aquinas College, majoring in Sports Management/Business Administration and minoring in Communication. Zoe is a member of the Sports Management Club where she serves on the board as Treasurer.She is also a Disney College Program Alumni after spending 7 months in Orlando. Zoe has a great passion for travel and health/fitness and in her free time, she enjoys hiking adventures, biking, and spending time with her friends and family.