All about the positivity: Meet John Agar

Every day, you have hundreds of interactions with different people. Many of them tend to be forgotten, but there are some people that just stick out and touch you in such a positive way. This happens to me whenever I talk to sophomore Johnny Agar, and I know that this is the same for many other people around campus as well. 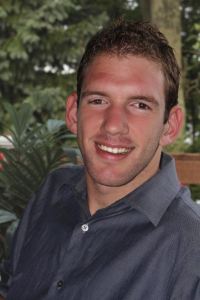 For those that don’t know John, he was born with cerebral palsy, and is wheelchair bound. Another important thing to know is that sports are his passion, and there’s no one better to talk sports with.

Being from an athletic family, John always wanted a way to be able to participate in a sport, which he was able to start in 2009, when he and his dad started running. Typically, his dad pushes him during these runs, which range from 5 Ks to marathons, but John plans to change that in the coming months. Johnny plans to do a whole 5k in his walker.

“I’ve always been inspired by people that have tried so hard to accomplish something that they find is nearly impossible. It’s always been a goal of mine ever since my dad has started pushing me through all of these races. It means a lot to me so I want to give back to him.”

Although the race won’t be until August, John has already started his training, including therapy sessions a couple nights a week to strengthen his muscles.

Anyone that has ever talked to John can tell how positive and inspirational of a person he is to those around him, so I asked him how he does it through it all.

“You know, I’ve always had that inspiration from my parents. They’ve always taught me that if you put your mind to something you can overcome any obstacle you come to, so I think that has really carried me throughout my life.”

John decided to come to Aquinas for a couple reasons, namely the four charisms that our campus stands by: Community, Prayer, Service and Learning.

“They really mean a lot to me. They’ve imprinted my life in more ways than one, and it’s really given me an opportunity to give back. It gives us an opportunity to show how much good we can do in the world,” he said.

John is a Sport Management/Business Administration major, which really isn’t a big surprise at all. His dream job is to work for ESPN, but this is not his life goal.

“You know, you can have all the jobs and prestigious awards, but I think in reality my goal is just to inspire as many people as I can, and those are the things that you can’t get paid for.”

When asked if he had any advice for his AQ peers, John had this to say:

“If you put your mind to something and you’re dedicated to what you want to achieve then things can go well for you as well.”