The phrase “dance your heart out” is not something that the girls on the Aquinas College Dance Team take lightly. All 13 dancers have given it their all this season, and their hard work and passion is impossible to miss. The team placed first in three of their competitions and second at the regional competition. Those wins granted them the opportunity to compete at the NAIA Division Nationals against 12 other colleges.

“We were undefeated in all of our ‘in-season’ competitions. We also beat the current reigning National Champions in the preliminary rounds at our Region’s National Qualifying Competition,” explained Renee Cavaliere, Aquinas’s dance coach of three years.

Although various illnesses, physical injuries, and exhaustion threw a loop to the dancers near competition season, the dancers “had to persevere and push as a team to help overcome these adversities,” mentioned Cavaliere. “It really built the team up to be stronger than we could ever imagine. It also showed each one of us that we really can overcome anything and still set program records.”

“People were not expecting Aquinas to be so strong but we have really surprised other teams and planted a fear in our top competitors,” said First-year student Ali Alderman. “This has been an amazing experience for us as a team because being top dogs, and deserving it, is a great feeling.”

This past weekend the team took their talent all the way to Davenport, Iowa to compete in the NAIA National Competition. After giving it their all the team finished fifth on the Nationals stage.

“I couldn’t have been happier, the hard work we’ve been putting in since September finally paid off,” stated First-year Student Lauren Bifano.

Two of the dancers on the team had a victory of their own this season as well. Alderman and First-year Kassidy Boldt were named to the NAIA All-American dance team. According to a press release online, “dancers had to perform three separate leaps, a triple turn, and a choreographed routine in front of a panel of judges, their competitors and a full audience.” Only 13 dancers out of five regions were chosen.

“When I was given the All-American title, I was so proud of myself. It took a lot of extra practice (and stress) outside of what was already going on with the team and school, but hard work pays off,” explained Alderman.

As for the rest of the season goes, the team is looking forward to the NDA Nationals competition in Daytona Beach, Florida which will take place April 6-10. The girls know they will be in for a challenge but are excited to showcase their high levels of talent and dedication to the sport.

“We have faith in placing very well, but either way, we’re glad to be doing this as no only a team, but a family,” said Alderman.

As coach Cavaliere said, “after all of the adversities our team has been through this year, it was the best victory to know we could prevail through it all and still reach our team’s goals.” 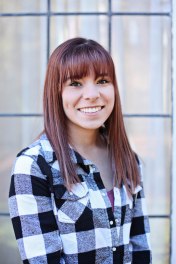 Tamara Tiethoff is a nursing major in the UDM/Aquinas program. In the future she hopes to become a neonatal nurse and continue writing on the side. She enjoys staying busy, but in her free time she loves drawing, spontaneous adventures, and coffee shops.