It’s spring, which means the Aquinas men’s and women’s golf teams have started their spring 2016 season.

From March 13-15, both teams took part in the Battle on Beale Street in Memphis, Tennessee. The girls team, led by senior Alicia Flood, took 6th place out of 9. The guys, who were led by freshman Campbell Crosby, took 12th out of 12 in the tournament.

The Lady Saints bring back a lot of talent this year with three seniors, Alicia Flood, Peyton Fredrickson, and Valerie Muyskens. Rounding out the squad are sophomore Emily Billing and freshmen Emma Millard and Erinn Scott.

With the season still early, the ladies have a lot of goals, and have been putting in a lot of hard work to accomplish them.

“We have been working hard hitting balls indoors at Alksnis a few times a week,” Flood said. “It’s always a tough transition into the spring season after a few months off.

“I think as a team we hope to place in the top few teams at Conferences in April.” She also added, “I personally hope to just continue to have fun as I finish up my last season at AQ, as well as to place top 10 in our upcoming tournaments.”

Having such a young team can play to the Saints advantage in many different ways.

“We will have a lot of room to improve and have more of a variety of people to choose from if some people aren’t playing too well,” Ruff said. “I believe we have the potential to do well and contend in the conference championship at the end of spring.”

Not only will the younger members of the team play a key role in this season, but also in the coming seasons.

“We are all willing to put in the work necessary to get better,” Crosby said. “As we keep working hard we are going to see exponential improvement over these next years.

“When we are all juniors and seniors, we are going to be incredibly experienced. Experience goes a long way in golf.”

Be sure to check out both the men’s and women’s teams as they compete throughout this spring. 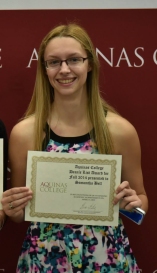