Athlete at the end: Latsch prepares for the final whistle

If you look at the last line of the tale of  “The Lion and the Gazelle,” you’ll see that it reads as follows: “It doesn’t matter whether you’re the lion or the gazelle; when the sun comes up, you better be running.”  Now, normally, this means that a person needs to get after the day ahead when they rise for the day.

In Leeann Latsch’s case, that roughly interprets to who gets their diploma first come graduation day: her or her brother.

“My oldest brother went back to school, and is going to be graduating, and it’s potentially the same weekend as mine. It’s coming down to the hours to who walks first in the commencement ceremony. I really want to graduate before him.”

Ladies and gentleman, Leeann Latsch. Senior defender for Aquinas College Women’s Soccer, and all around competitor.

Latsch is a four year starter for the Saints. She originally came in playing as a forward, where she posted 14 goals and six assists in two years. Going into her junior year, she was called on to defense, a position she had been familiar with before college. The move paid off, as she was named NAIA Honorable Mention All-American.

“I had played it throughout club, so I was familiar with it,” she said.  “I was actually recruited as a center back, but they ended up putting me at forward for some reason. That worked out. I’m actually kind of going back to my roots with center back.

“I think it’s the position where I’m best. I think that the abilities that I have, they play into defense more than they do to offense.”

Latsch began playing soccer at age six because she wanted to be like her brothers. She played on an American Youth Soccer Organization team, and while she enjoyed it, sometimes opposing parents did not. Something about playing with the tenacity of a bull in a China shop at age six wasn’t overly appealing.

“Parents on the other teams would get mad at me because I would play like my brothers, on of whom is eight years older than me, so I was watching middle school soccer. I had a lot of parents who were upset with me. That was the beginning of my soccer career. But I got a lot of support from it, from my coaches. They loved that. They wanted to see a player who was going to do that.”

As Latsch got older, she continued to bring fire to the field. She started playing premier soccer when she was 15. This came as no easy task for the Spring Lake resident.

“I chose to play over on the east side of the state, so I would travel to Detroit a couple times a week to play with this team because I thought they were better players, and I thought the opportunities that I was going to get from colleges would be better through this coach because he had so many connections.

Since middle school or early high school I figured I could play college soccer if I wanted to. I think I have enough passion – I did, and I still do -to continue playing.”

The game of soccer, albeit stressful, brings peace to Latsch in a way, and the fact that she keeps getting hooked on it shows that although her competitive career may be coming to an end, her love and passion for it will always be evident.

“I’m a very competitive person. I need that outlet in my life. I love the sport as the sport it is. It’s really therapeutic for me. I love going out and being able to forget everything, just go play the game of soccer. I enjoy that. Just being in that moment. I don’t think I’ll ever be able to lose the drive because it’s a beautiful game. It’s been a part of my life for so long. It’s a part of myself.

“What gets me hooked over and over again about soccer is that it’s such a creative game. It’s a challenge, and it’s just that it’s a game. It’s definitely a mental game. I like to think of it as a chess match. I love the creativity of it.”

She also noted that, as many athletes do, the support of her parents helped get her to this point.

“The supported me from day one. I went over to the east side to play and that was before I had my license. They would drive me over there two to three times a week. How much more loving can you get? They really loved their kid to do that.”

Although Leeann Latsch’s career at Aquinas may be near done, her passion for the game is not. Though the cleats may be hung up at some point for good, there is no doubt that her competitive spirit will continue to bring her success in life. 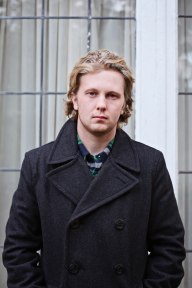 Charlie Crowley is a senior studying political science and journalism.He is The Saint‘s  Sports Editor. He spends most of his time sleeping, eating, and on Reddit. He’s also a Hoosier, and proud of it, but can’t hit the open three to save his life.