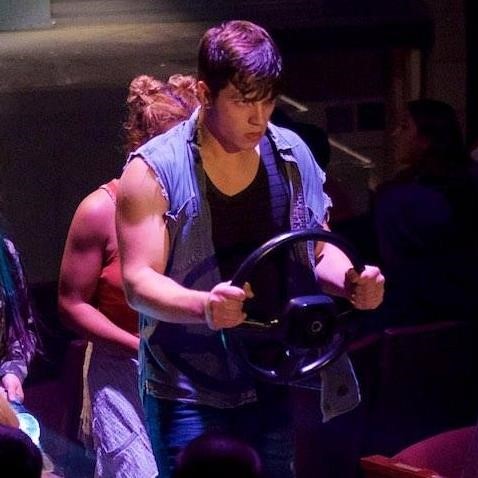 With election propaganda all around, haze floating across the theatre, and newsreels from the past, you are brought to the early 2000s when Green Day wrote their hit album “American Idiot.” The people around me were singing along with the songs that they had grown up with, and I have to admit, so was I.

Winner of a Grammy award in 2011 for Best Musical Show Album, Jolene Frankey describes the show as, “a tribute to the rage, rebellion, and rock n’ roll of American youth, the show is set in the days of ‘soda pop and Ritalin’ and follows Johnny and his two friends, Will and Tunny, as they journey through the suburbs, the city, and the war.”

The set brings the viewer to the downtown of a rundown city. Graffiti covers the buildings and the band is visible through the windows of the buildings. Rafters are behind the towers for the actors to climb on to get to the higher windows. A layer of haze also covered the theatre to create the illusion of smoke and smog. There was very minimal set changes with just a couch and a bed to show whether they were in a home or a bedroom.

Bill Dunkel, costume designer for Aquinas’ shows, Circle Theatre, and many more, has once again done an amazing job capturing the time period with costumes. The costumes were very punk with plenty of flannel and chains for days.

To add to the greatness that is “American Idiot,’ Aquinas’s very own senior Ben Avery is featured in this show as the Dance Captain.

He said that he is “responsible for making sure that the choreography that we learned is maintained through the performances. I’m mostly there as a resource to the others in the cast.”

Another element to the show is some of the actors play their own instruments in the show. It highlights Lucas Story, who played Johnny in the musical, plays guitar along with multiple other cast members.

When asked if they were actually playing the instruments, Avery replied, “Everyone you see that is holding an instrument practiced playing the part, but because of limited ports on the music board, some of them aren’t actually heard.”

Lastly, Frankey does a fantastic job of utilizing the space that Actors’ Theatre has to offer. Normally, the best seats in the house are center orchestra, but for this show it is in the mezzanine since the actors spend a great deal of time going around the aisles and dancing in the space between the Orchestra and Mezzanine. There are also rafters for the actors to hang off of much like the ones behind the buildings onstage.

The musical premiered on Oct. 27 and will run through Nov. 12 at Actors’ Theatre off of Fountain Street in Grand Rapids. Tickets for students are $22 and for general admission they are $28. They also offer student rush tickets for $10 the night of the show, one hour beforehand. So, don’t be an American Idiot—go see “American Idiot.”