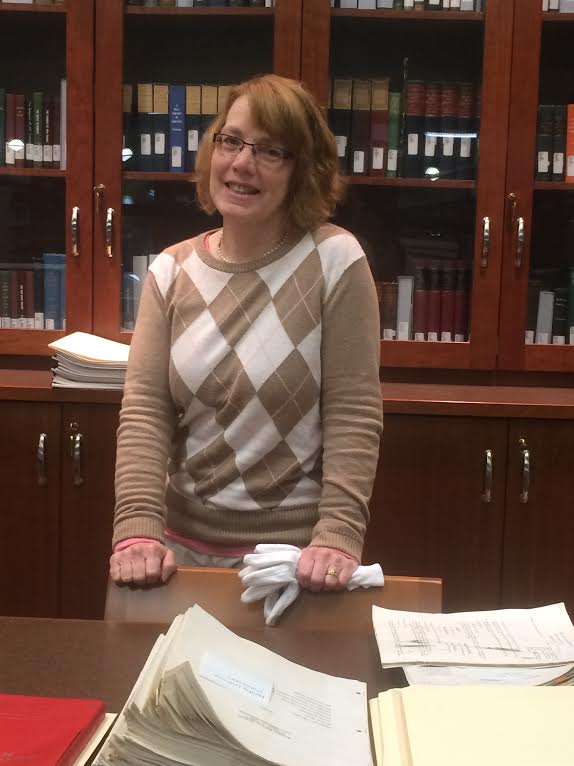 “Preservation efforts require an awareness of the conditions that speed deterioration of archival material whether that means removing rusty paper clips or freaking out when the basement storage area flooded last spring,” Morrison said.

Morrison also collects new documents that pertain to the college, this is done by searching and communicating.

“Collecting involves everything from diving into dark corners in the basement of Holmdene to communicating with people throughout campus in order to help them preserve their old records as well as getting them to send me the information and images they are currently generating.”

Certain historical records must also be converted from hard copy to digital formatting.  However, Morrison does all of this not only because it is her job, but because she genuinely enjoys history.

Morrison has been a lifelong history nerd and told this reporter that as a child she “had Reader’s Digest books about the Aztecs and the Incas at the same time I had Barbie dolls.”

Morrison received her BA in Public History, with minors in English and Anthropology, from Western Michigan University, and her MA in Public History from Bowling Green State in Ohio. She has been employed at Aquinas since 2012 and is the first professionally trained archivist to be employed by the college. However, she has not only been our archivist.

Morrison has also worked as an Adjunct Lecturer of History at Aquinas, as well as working as Davenport University’s archivist since 2010. She likes to call herself “two halves of an Archivist” due to her split time between our archives and those at Davenport. As a history lecturer here at AQ, Morrison taught an Intro to Public History course. There were various activities in this course.

“We had a private tour of the collection area at the Ford Presidential Museum, a historic preservation session after exploring inside Brookby and listened to Mary Olivarez tell ghost stories.”

Most of  Morrison’s personal hobbies are history oriented, she says she has been working on a manuscript that is “part memoir, part historical fiction and centers on a mausoleum in Oakhill Cemetery.” However, her non-career related hobbies include running “short distances slowly,” “nursing an addiction to lattes,” and “worshipping cats.”  Her one piece of advice to AQ students?

“Soak in the beauty of this campus and the awesomeness of its history. Have a latte in the Moose and ask yourself when and why the third wing of the building disappeared. Also, come and visit me in the archives when you want to do history projects or even if you want to know more about the archives field.”