Justina Ouellette is a junior at Aquinas double majoring in theatre and communication. She is an RA, actress, a friend to many, and involved in various other departments on campus. Multitasking is something she specializes in and I don’t know how she does it all.

Justina became an RA last year, was promoted to senior RA this year, and loves the role. She said the role was a great fit.

“I love people, cliche as it is, and I like to help them develop and thrive. I am also the ‘mom friend’ and I figured it would translate well to this job.”

She has been able to meet a lot of people as an RA, and is thankful for the friendships that have formed because of it.

Justina is the triple threat in the AQ Theatre Department. She does her best to support the program by helping behind the scenes, on stage, and using her famous #JustinaShamelesslyPromotesHerPlayWeek to help promote shows. She’s been involved in every show since the second semester of her freshman year.

She said, “Not only do I need a certain number of shows to graduate as a theatre major, I just love everything about it. It’s the least dangerous adrenaline rush I’ve been able to find.”

Her passion for theatre has always been there.

“I’ve always been a bit of a show off; I remember dancing in my living room when I was little, watching my reflection in the TV. But what really got me hooked was the first Young Americans workshop my mom signed me up for the fall of my freshman year of high school. Three days of nothing but performing, and I haven’t looked back.”

Being both an RA and theatre major can take up a lot of her time, but she has learned a lot about time management because of it. Her goals for the rest of her time at Aquinas include doing more shows with the theatre department, continuing to help with CYBIAC, and enjoying time with the people she loves here on campus.

After graduation she would love to continue her current passion of theatre. She said, “I’d love to first get some performing experience and my teaching certificate with the Young Americans, then maybe get my Master’s in Student Affairs? I love being an RA. Ultimately, I’d love to teach theatre and direct shows for elementary to high-school age students, and just keep performing.”

When it comes to celeb crushes she has her heart set on Derek Klena.

Justina calls him the total package, saying, “He’s got a sort of dorky look, and the voice of an angel. Now he’s in “Anastasia on Broadway,” and can you say childhood fantasy come to life?”

He played college baseball and she played softball…they are pretty much soulmates.

Narrowing down her favorite theatre show was hard but she decided on “Dogfight,” saying, “It’s beautifully composed and completely heartbreaking. Also, Derek Klena.”

As for her favorite AQ show she chose “As You Like It,” adding, “but not because I’m biased or anything. (I’m totally biased but man was it a fun one!)”

She loves all the memories she’s been able to make at Aquinas and all the people she’s met over the last couple of years.

When asked about her favorite memories she said, “There are so many, like napping on my friends’ floor every day freshman year, or being fed in all of the houses while on duty this year. Um, last year, Spring Formal. [I] danced the night away and then got milkshakes with two almost strangers who I ended up becoming close with. Good times.”

Feel free to say, “Hi” to Justina on campus if you’re interested in learning about becoming an RA, wondering how to get involved in theatre, or looking to make another friend on campus (her wonderful, bubbly personality is a can’t miss). 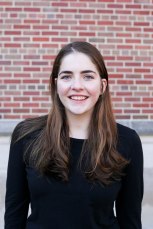 Veronica Burns is a senior studying a dual business communication major and journalism. Her loves include cats and actor Tom Hiddleston.