Squibb Coffee Bar: a must for java junkies 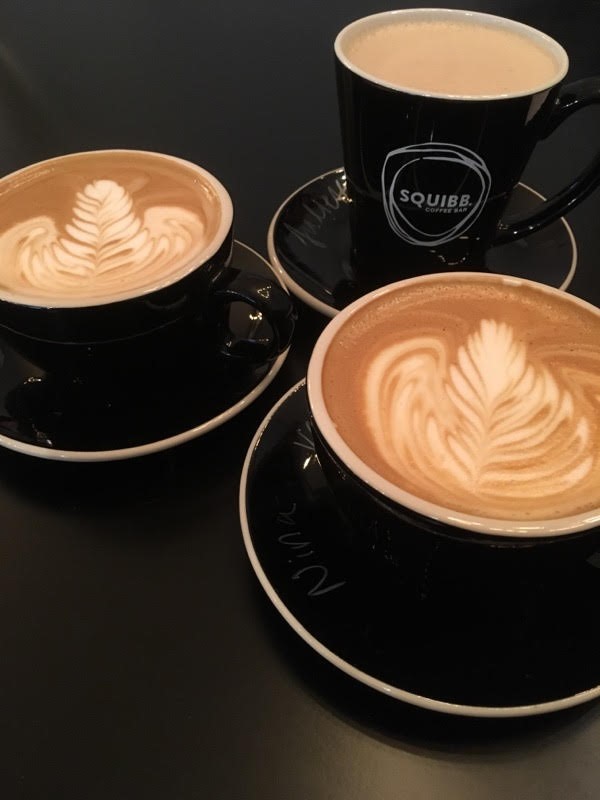 I think the two things I’ve spent the most time on since starting college are doing homework and drinking coffee. My friends and I often choose a café off campus for studying and caffeinating, which is really convenient. But once you’ve been to the staples, like That Early Bird, Common Ground Coffee House, The Sparrows, Lantern Coffee Bar and Lounge, and, of course, Biggby Coffee (several times), where else can you go to switch up the atmosphere?

I submit for your consideration Squibb Coffee Bar, a new café on Wealthy Street. With locally brewed coffee, yummy snacks (including some vegan brownies that looked especially good), and lots of tables perfect for studying, not to mention the giant mural of a squid on the wall, what more could you want?

It’s run by a father-daughter team, Dennis and Mallory Squibb. And eventually, this coffee bar will become a wine and coffee bar, so if you’re over 21, keep an eye out for that. But currently it’s a nice space to either study or take a study break. The area is almost overwhelmingly clean—one student said it was “too clean”—but when you’re looking for a low-distraction zone, that sounds perfect. And the lighting fixtures are not only functional, but also beautiful—they received many compliments while I was at the café.

As a college student on minimum wage, I appreciated the relatively low prices at Squibb Coffee Bar. Most things were under $5, and they tasted just as good as some of the $6 and up drinks I’ve had at other places. Additionally, Squibb serves coffee drinks you might not find at other places, like a green tea latte, which was polarizing among my friends. One liked it; one thought the texture was just too different to become a favorite. Either way, it was a new experience, and both friends ended up going back to Squibb later, so it obviously did not ruin their opinion of the café itself.

The actions of entering Squibb and ordering a drink are conventionally the same as would occur in any café: say hello to the barista, peruse the menu, order the drink, pay for the drink. But at Squibb, when the barista asks for your name, instead of getting it spelled wrong on the side of a plastic cup, you’ll get a mug and saucer with your name instead. The barista made a point to ask us how to spell our names before beginning to write, which was appreciated by me, my name, and its four variations.

And while we all love The Moose Café, Squibb is not exactly the same. The chai lattes at Squibb are spicier than the sweet ones at The Moose, and the coffee is, in my opinion, stronger at Squibb. Of course, I appreciate both in their own ways, but if you’re looking for a replica of The Moose, you won’t find it here.

Bridget Gibley is a first-year at Aquinas studying English and Women’s Studies. She thrives on reading, writing, and lots of coffee.