Together we rise: Women’s March on Washington 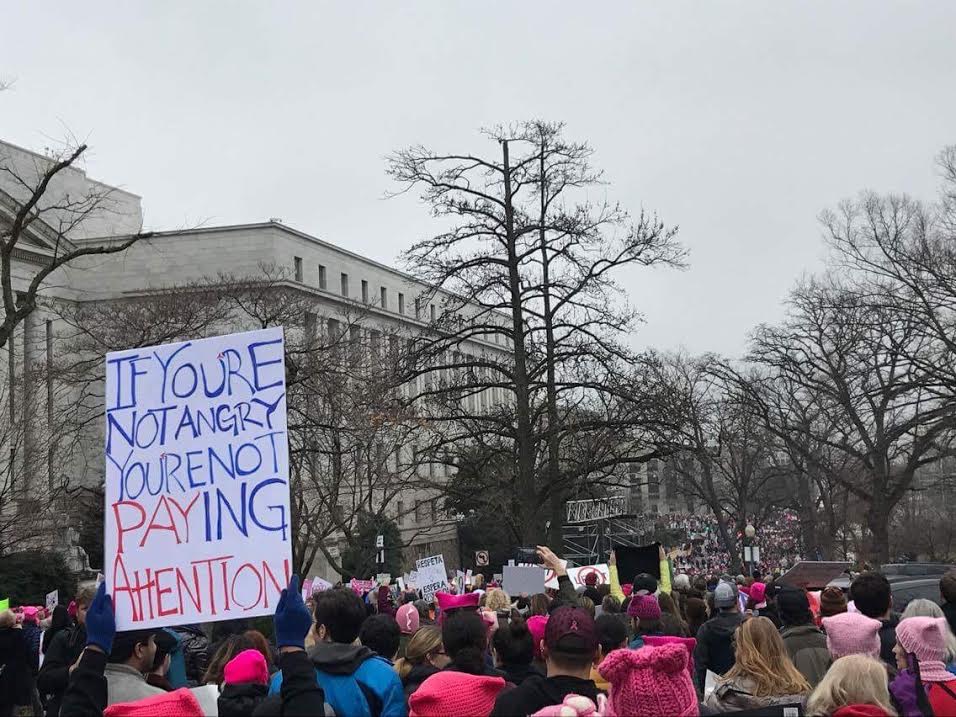 The Women’s March on Washington, held the day after President Trump’s inauguration, had a positive energy like I have never experienced before. Even on the drive there, people in cars honked and waved hello, holding up signs in solidarity and excitement for the coming shared experience. Rest stops along the way were full of women wearing pink pussy cat hats, representing the unofficial uniform of marchers. As we walked to the rally point on the day of, Capitol Street was lined with signs proclaiming quotes by Reverend Doctor Martin Luther King Jr. such as, “Hate cannot drive out hate, only love can do that,” am abundance of pride flags, and a house covered in paper hearts. Churches and businesses opened their doors offering free coffee and the use of their bathrooms.

The marchers descending on the capitol building were primarily women but included men, children, dogs and babies, all proudly toting homemade signs. Marchers chanted and sang as we walked towards the Washington Monument. Everyone was smiling and polite as the crowd pushed together and it was impossible not to be affected by the feeling of community. We walked with purpose, in solidarity with all those who been verbally assaulted, demonized or threatened over the past presidential campaign. The Women’s March was not a protest, as many have tried to label the movement. Rather, the march stood for human rights, dignity, and justice. This is a fight that has been fought before and we are carrying the torch from previous generations of women. I walked not just for myself, but for all women, survivors of sexual assault, people of color, Muslims and those of diverse religions, the LGBTQ+ community, immigrants and people with disabilities. I marched because no one should feel attacked by their own leader. I marched because democracy is not a spectator sport.

As we all moved towards the epicenter of the rally, I remembered something that Dr. Roger Durham used to say all the time in class, “It is so good to be a part of history.”

Before walking with over 500.000 marchers in Washington, I never really understood what that meant. However, as the crowd chanted and cheered around me, I was struck by the enormity of what was happening. This was the largest gathering of disabled Americans in history. Over 600 marches occurred worldwide. Marchers were guided by principles of non-violence and no arrests whatsoever were made.

Fellow marcher and Aquinas student Ali Barr said, “It hasn’t quite hit me how important this will be to my daughters.”

It is so incredibly humbling to think that pictures from the march we participated in will be in the pages of their history books.

On Jan. 21, 2017, I was a member of the largest single day demonstration in the United States ever. I marched in a sea of pink hats, dedicated to building people up. I marched for the people beside me and all those who could not attend the D.C. march or one of the sister marches that occurred in all fifty states and on all seven continents. I saw several signs during the march that proclaimed, “This is just the warm up.” The physical march may be over, but the sentiment has not been lost. The march continues. We are members of the love army and we are not done.