“Baby with the Bathwater” a big hit 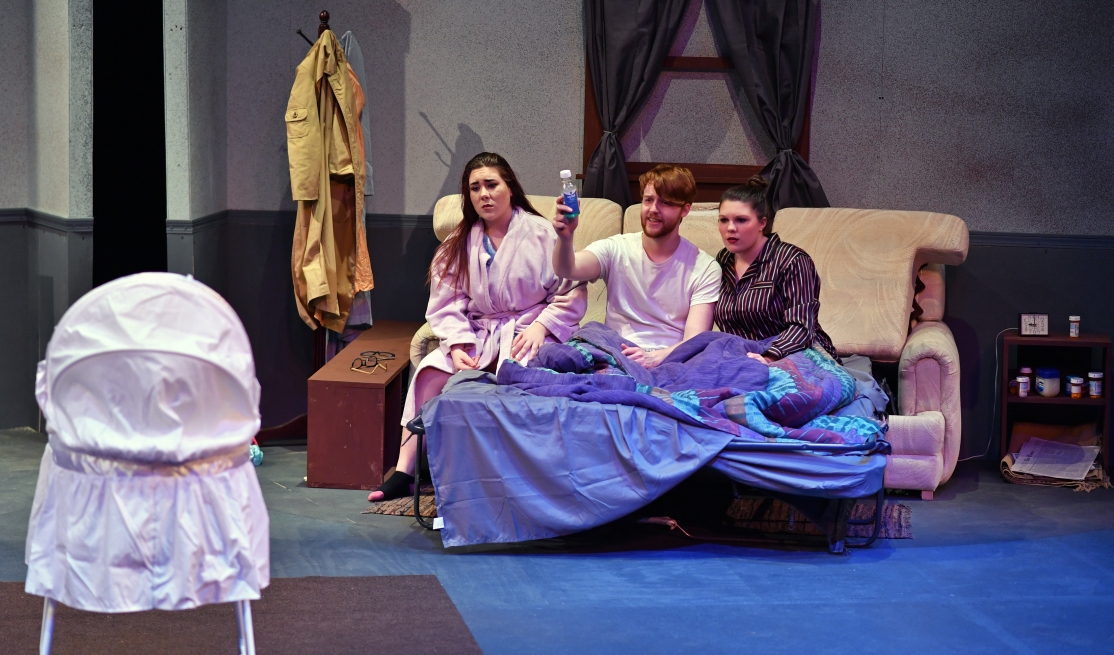 Freshman Emily Cipriano, junior Tanner Kosten, and freshman Cassie Herrington are shown in a scene from “Baby with the Bathwater.”

AQ Theatre just added another stellar show to its books. “Baby with the Bathwater,” by Christopher Durang, was performed on campus Feb. 16-19, and it was a sensation.

I was lucky enough to see this play on its first night, and if the actors had any opening night jitters, they didn’t show it. From the minute freshman Emily Cipriano and junior Tanner Kosten stepped on stage at the beginning of Act 1, the audience was mesmerized.

“Baby with the Bathwater” is a dark comedy about the trials of raising children, pointing out that it isn’t easy to be the parent or the child in that situation.

In Act 1, Helen and John (Cipriano and Kosten) realize how unprepared they are to be parents. They do not know the sex of the child, and they cannot settle on a name, calling the baby “it.” Nanny, played by freshman Cassie Herrington, arrives to take care of the child, but it is soon clear that she is not the better option. She screams at the child, throws it into the crib, and seduces John, all in a few minutes.

In Act 2, the child is named Daisy and is going through periods of either running in front of cars or lying idly in a laundry basket. Later, it is revealed that Daisy is a boy; his parents never bothered to check the sex of their child and simply made a guess. Daisy, played by freshman Devin Boxey, goes through many years of therapy in a brilliant jump-cut scene, and the audience is shown the consequences of his unconventional upbringing.

“It was both upsetting and hilarious at the same time,” said freshman Juliette Rickel, summing up the play in one sentence.

The cast was relatively young, but that didn’t stop them. Under the direction of Aquinas professor Kyle Westmaas, they seemed more like professional actors than those students you see in your classes.

Emily Cipriano’s timing was excellent as the long-suffering Helen. And while she was hilarious throughout the whole thing, her best moment came at the end, with a moment of vulnerability that made her a sympathetic character. Cipriano played it perfectly.

Tanner Kosten was the perfect blend of the desire to be responsible and the fear of having to be a father. His constant confusion made for some laugh-out-loud moments, and the audience loved it.

Cassie Herrington was delightful, first as Nanny and later as a teacher who is disturbed by young Daisy’s essay. It was clear that Herrington threw herself into the role, and her energy kept the plot going.

Freshman Bryanna Lee was also wonderful in her dual role of a would-be baby thief and a not-so-fit principal. She was scarily believable as these two troubled characters, and her lines got some of the biggest laughs of the night.

Devin Boxey was exceptional as Daisy. The therapy scenes were wonderfully executed as Boxey brought a very vulnerable and unsure character to life. Aside from the odd premise, there were very relatable moments, and the audience seemed to see parts of themselves in Daisy’s questioning of his life.

Freshman Bridgette Slezak, sophomore Lauren Washburn, and senior Sarah Craig rounded out the cast. This show made it impossible to pick a favorite character or a standout actor, as all of them had their moments. And each moment was a gem.

Attending this play was a finely crafted experience, from the programs that doubled as coloring books to the music playing before the show and in between acts. The audience laughed at times and was rightfully uncomfortable at times, but it was clear that the audience was engaged throughout the show. By the time the full cast took a bow, people were on their feet, giving them a standing ovation.

Bravo to the AQ Theatre team for another superb production.

Bridget Gibley is a first-year at Aquinas studying English and Women’s Studies. She thrives on reading, writing, and lots of coffee.