Open Letter: a response to the documentary protest 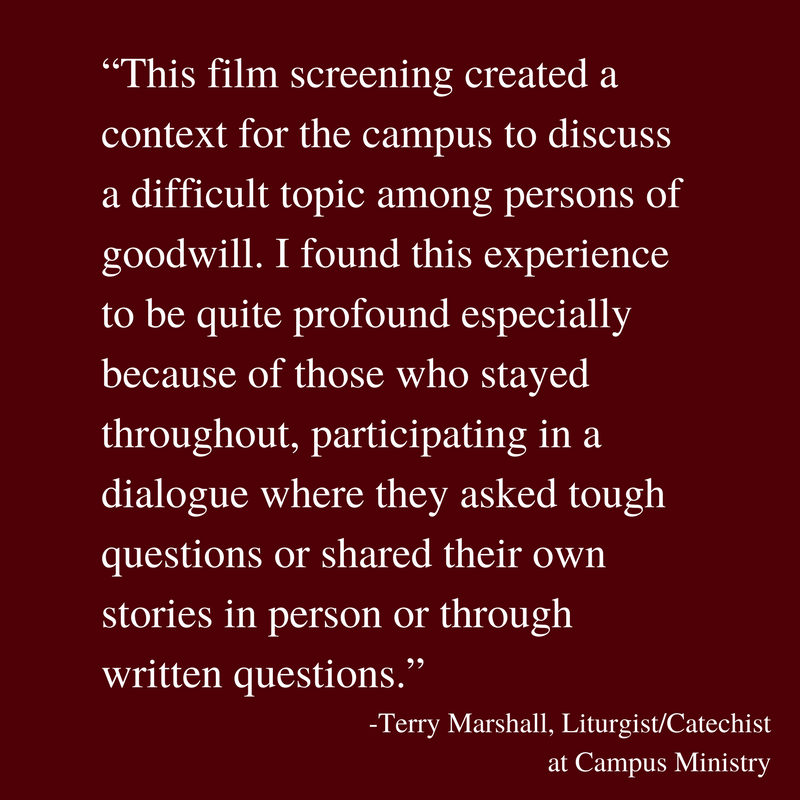 I appreciate the opportunity to respond to the misunderstanding that has accompanied this Catholic Studies event on our Aquinas College Campus. It might be helpful for some to know that the film premiered at a Christian LGBT Film Festival and that last year this film was screened at a nearby college without any controversy.

The Catholic Church’s teaching on matters of human sexual relationships are directed toward the good of persons and that of the human family. Neither Scripture nor the Church’s teaching is ordered toward shaming or fomenting hate. If utilized as a means to diminish the dignity of persons, this is a gross misunderstanding and misuse of Church teaching.

There are volumes written concerning the Church’s teaching on human sexuality, its understanding of the complementarity of women and men, and the inevitable challenges to living chaste lives because of our wounded nature. These trials and challenges are of concern to the Church. However, until recently, the concern for persons of faith who experience same sex attraction but who desire to live chaste lives that blossom in friendships has not received such thoughtful attention. The Church in her pastoral care of souls is very concerned to accompany these persons as well. David Michael Phelps, the writer and producer of this film, crafted a film that addresses this particular concern.

The film was produced under the auspices of the Courage Apostolate, a ministerial outreach of the Catholic Church to those who strive to navigate their sexuality as persons of faith. In order that the Church’s teaching might not be too heavy a burden, she offers support to those who can benefit from this ministry. The Church offers a third way that secular society does not think necessary and even repudiates. The film, “Desire of the Everlasting Hills,” and other films like it, provide a respectful way for the stories of these persons to be told. This particular film is a tool, not to shame the LGBTQ community but to be a remedy for shame and to share the good news of God’s love to persons who are uniquely marginalized.

I was delighted that Aquinas College would welcome an opportunity to clarify that the Church is concerned to reach out to her children who bear a particular burden that is not easily understood. It is unfortunate that those who protested this film unwittingly dismissed the burden that is real to so many. There is no hatred in the Church’s teaching on human sexuality. It is born of God’s selfless love displayed in the life, death and resurrection of Jesus the Christ; a love to be emulated in the community of faith.

I am saddened that the protestors perceived the screening of this film to be at least insensitive and at worst hateful or bigoted towards the LGBTQ community. There was no threat in showing the film, “The Desire of the Everlasting Hills.” It is a film that portrays the soul’s journey into the heart of Divine Love. The film might threaten its detractors’ premises on the meaning of love, but there was no threat to the dignity of persons or to their physical safety.
Overall, I think that the screening of the film was a great success. The evening began in prayer. Many friends and alumni of Aquinas College congenially participated. Aquinas College took special care to ensure that the Counseling Dept., Campus Safety, and Campus Ministry were present to provide any assistance in case the need became apparent. In community we watched a film that drew us into the poignant stories of real people who are companions in the journey of faith. The film was not about broken relationships, but about transformed relationships. Indeed, one of the subjects of the film, Rilene, was reconciled with her partner, Margo, and cared for Margo until she died of cancer. Another subject, Paul, still shares a home with Jeff. Paul and Jeff have chosen to live together in friendship.

This film screening created a context for the campus to discuss a difficult topic among persons of goodwill. I found this experience to be quite profound especially because of those who stayed throughout, participating in a dialogue where they asked tough questions or shared their own stories in person or through written questions. I am grateful to Dan Mattson, one of the subjects of the film, and to David Michael Phelps who fielded questions from the assembly. The film and the discussion that followed bore witness to the words of Benedict the XVI, a quote that prefaced the interviews with the three subjects of the documentary: “Look at the face of the other. Discover that he (or she) has a soul, a history and a life, and that he (or she) is a person and that God loves this person.”

It would have been my hope that more would have had the opportunity to listen and to be heard in a setting that encouraged each of us to see the “other” as a person loved and cherished by God.