Marching on: The Women’s March on Aquinas 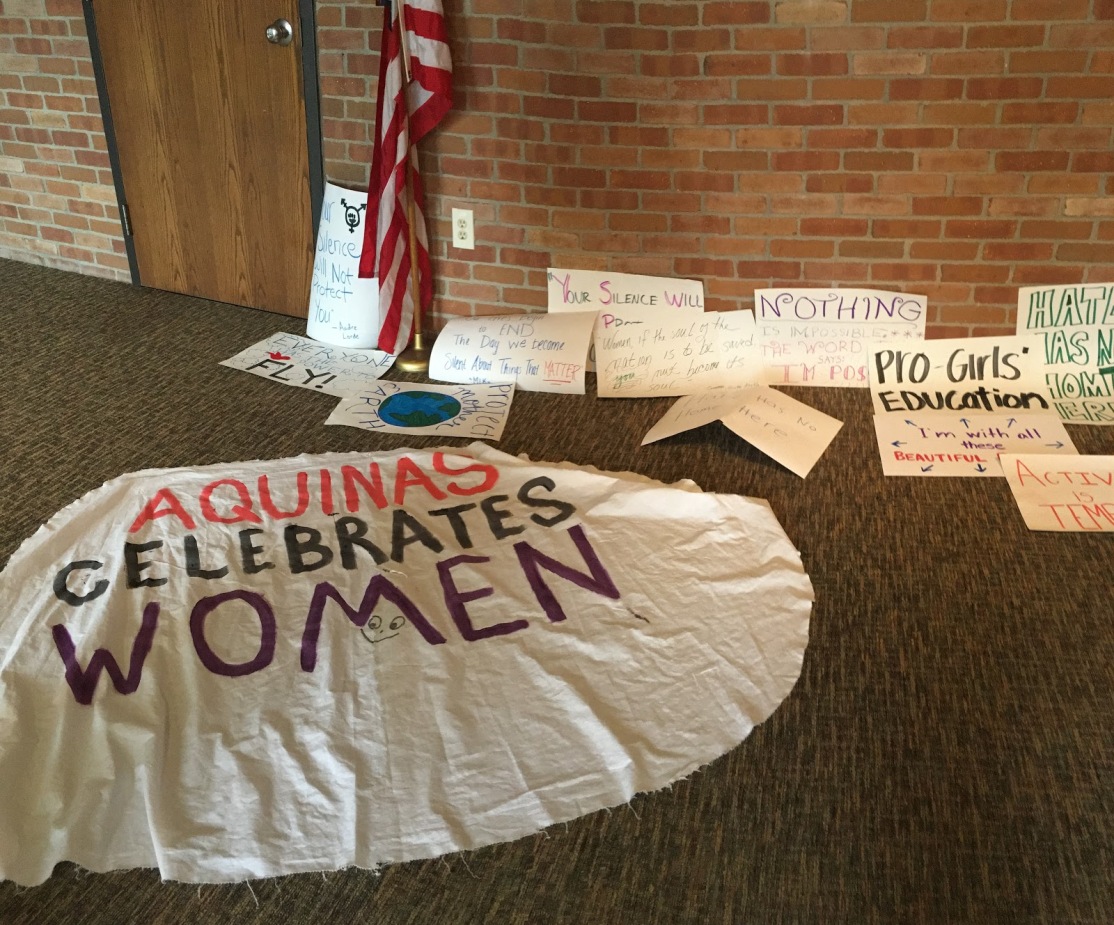 On Sunday April 2, individuals from across our community gathered to participate in Aquinas’ own Women’s March. The march was organized by several students who had the opportunity to participate in the Women’s March in Washington D.C. through the Social Action Committee. They wanted to provide an opportunity for community members to participate in a march, especially if they had not had a chance to make it to one of the large scale marches that took place back in January. As stated by the Jane Hibbard Idema Women’s Studies Center, “Everyone is welcome at this gathering! Though we all have different reasons for marching, the point is to come together and show the Aquinas and Grand Rapids communities that silence in times of injustice is not an option.”

Feminism is intersectional, which means that it ties together with a wide variety of different issues faced by our world today. It is a belief system that comes in many variations and it is open to anyone who feels that equality is important. Although the crowd at the march was diverse, and there were many opinions that contrasted one another, the important thing was that the crowd came together to draw attention to the cause.

As stated by Dr. Amy Dunham-Strand, “Women have a long long history of coming together for all sorts of human rights. Ultimately, in the pursuit of a world that is more equal and more just for all people.”

The idea of making the world more equal and more just is one that ties deeply with Aquinas’s deeply rooted Catholic faith. This was emphasized when the march was opened up with a prayer from Sister Maureen Geary OP, Prioress. She led participants in a prayer that was finished with a blessing over the Aquinas Staff and Students that chose to participate. After prayer, the Aquinas Women’s Chorus sang a beautiful rendition of  MILCK’s “Quiet”and the march began.

The march, which took a route that led from Donnelly Center down to Albertus Hall, was one that impacted many of Aquinas’s students. When asked about why she chose to march, Freshman Alyssa Noch said, “I chose to march because, not only was I unable to attend any of the marches in the days following the presidential election, but also because I recognize the need for more equality. It is an issue that is very prevalent in our society today. I wanted to be a part of the movement. As this was one of the first marches I’ve ever been able to participate in, I was thankful for the experience as well.”

Alyssa was not the only student who felt strongly about the march. Student Jane Johnston said that she marched “to stand in solidarity with everyone who feels oppressed around the world. I march for all of those who think we live in a perfect world where inequality doesn’t exist, because it does and we need to prove them wrong so we can move forward. I marched because my mother always taught me to stand up for what I believe in, and I believe in nothing more than that the future is feminist.”

Although we live in a world that is full of fear and a lack of understanding, it is important that we gather together to draw attention to the issues that are here. Keeping silent will do nothing but allow the injustices in our society to continue. This march was one that drew attention to issues in a peaceful manner. It was a march that accepted individuals of a variety of backgrounds and a variety of beliefs. It was a march that showed that no matter how much hate we have in our world, there is always an opportunity to come together and stand in solidarity against it.