Form and color in April 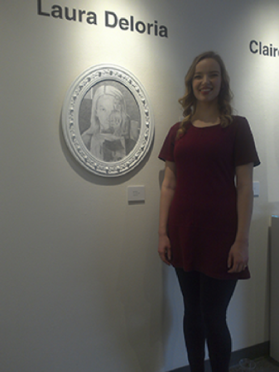 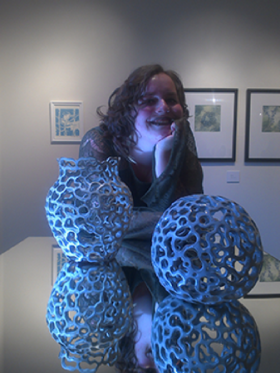 The 2017 B.F.A. exhibition—featuring artwork by the Aquinas College B.F.A. program’s 2017 graduating class—opened in the Art & Music Center Gallery on Sunday, April 2, and will run up to Sunday, May 6.

Deloria, who is from St. Joseph, says her first drawing class at Aquinas—Basic Drawing I, which she took as a sophomore in 2014—will be one of the things she remembers about her time here, along with the sense of community she experienced in the AMC.  She became an art major in her junior year, and says in her artist’s statement that this last year has been a particularly formative one for her.

For her, putting together the show has been a deeper emotional experience than what she had thought it would be.  She explains that each of her pieces has a unique meaning for herself—and that meaning is rooted in what else was happening in her life while she created the piece—so assembling the show with all of the pieces together triggered so many memories and experiences that she has been completely overwhelmed.

Gill too had her early memorable moment at Aquinas in the fall semester of her sophomore year, when, in her first ceramics class, she found out who she was really meant to be. She says in her artist’s statement, “I have found that with ceramics I can really lose myself in my work.”

She will also remember the classes she took in painting and printmaking during this last year.  The first words in her artist’s statement are, “I love form”—she means form in ceramics—and she added in conversation that she also really enjoyed working with designs in two-dimensional pieces.  Her artist’s statement proceeds to expand on one of the things she likes to do with form in ceramics. She is “drawn to making large pots with really narrow bases,” playing with the paradox of an oversized object seeming to float freely in the air.

Professor Dana Freeman said that both Deloria and Gill came into their own over this last year, their work becoming more and more finished and resolved, and that both artists create work that is really reflective of who they are.

As for plans after graduation, both artists are going to stay in Grand Rapids.  Deloria will be working at an art warehouse while simultaneously making her own pieces, and Gill, who is from the greater Grand Rapids area, plans to have her own ceramics studio, where she will also teach ceramics in a more relaxed environment than what you would find at school.  She likes the art scene in Grand Rapids, and she says it could use a studio space like the one she has in mind.

Freeman added that Deloria’s artwork and Gill’s artwork also go well together, which adds to the success of the show by making it a cohesive whole.

The show will be open for viewing for the rest of the semester—up to the Sunday after Commencement—10 a.m. to 7 p.m. on Mondays, Tuesdays, Wednesdays and Thursdays; 10 a.m. to 4:30 p.m. on Fridays; and 2 to 6 p.m. on Saturdays and Sundays.

Yashowanto Ghosh is a senior with a major in communication and minors in journalism and writing. Jasho is also an alumnus of Aquinas (B.A. German ’11).