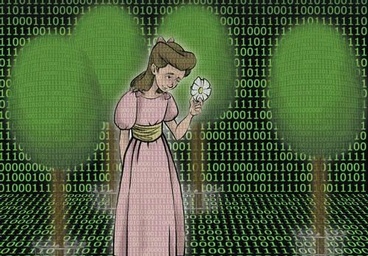 Actors’ Theatre opened their 36th Season with “The Nether” by Jennifer Haley. The play ran Oct. 5-4 and it was directed by Aquinas’ own Randy Wyatt. “The Nether” is the first of many thought-provoking shows that Actors’ has lined up this season.

The show is about a detective interrogating a man known as Sims, played by Russell Roozeboom. Detective Morris, played by Melissa Fortino, is trying to figure out if Sims is Papa, the runner of a realm in the Nether that lets pedophiles explore their urges virtually. The show deals with trying to decide if what the people in this realm, known as The Hideaway, are doing is actually considered illegal.

The show’s set was one of the most beautiful aspects of the show. It would light up and project screens when they would enter the Nether. Then they would switch some of the set pieces around and it would become a Victorian-style room.

Another great aspect was the props for the show. There was a beautiful crystal cake that Papa gives to Iris, played by Voca Ford. All of the set dressing also looked like it belonged in the Victorian age.

The lighting was amazing, really transforming the space into the Nether every time the show would switch places. There was also an amazing lighting effect when Woodnut was walking over to kill Iris. The purples and reds made the stage feel the stress of what this scene was coming to.

While all of the acting was phenomenal, the one that really stood out was Voca Ford. Being a 12-year-old, this role must have been a very hard one to play. She did amazingly with all of the direction she was giving and really made the audience feel the uncomfortableness of The Hideaway.

“There is a line, even in our imaginations,” Morris said, and I think this line is a great summary of the play. Is there a line between the virtual act of child molesting and doing it in real life? In real life, what was happening was a horrible crime, but in the Nether it was happening between two consenting adults. Even the detective admits that she is very drawn to The Hideaway and was falling in love with Iris. Was what they were doing wrong, or was this just a way for them to act without acting on a real child? This show asked the big questions that people do not tend to think about.

While the run of “The Nether” has ended, Actors’ season is far from over. If you are interested in seeing even more thought-provoking, contemporary theatre, check out actorstheatregrandrapids.org for the full lineup for this season. You can also check out ways to volunteer if you are interested. Tickets are on sale now.