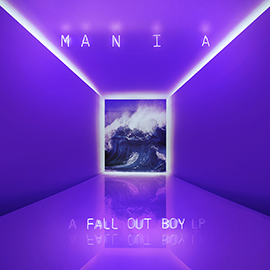 If you happened to hit your punk phase any time in the last 10 years, or really were anywhere but under a rock in the mid to late 2000s, you’re probably familiar with Fall Out Boy. But if you’re not, let me be the first to introduce you to the punk-pop culture phenomenon that they are. Formed in 2001, the band has seen a few changes in their lineup, but are now made up of Patrick Stump (lead vocals and rhythm guitar), John Trohman (lead guitar and backing vocals), Pete Wentz (bass and backing vocals), and Andy Hurley (drums). Each brings not only their amazing talents, but also a vivacious energy to the group.

Fans got their first sneak peek at the group’s latest album, “M A N I A,”  in April of 2017, after a trailer and some cryptic tweets. The single “Young and Menace” hit the scene with a deep thundering boom. Very unlike any of the group’s previous releases, “Young and Menace” starts off slow and surreal before bringing in a familiar beat, only to tear you in an entirely different direction about a minute in with an electric overlay and wild beats. The track was somewhere in the neighborhood of Fall Out Boy, at the new intersection of pop and… dubstep? It took me a few listens before really coming to love this song, even though it was completely unexpected.

Over the following months, Fall Out Boy dropped a few other teaser tracks from the album, stringing their fans along with tantalizing tidbits. And the base remained as loyal as ever, even after the album’s release was delayed from September 2017 to January 2018. But for many, it was well worth the wait.

“M A N I A” dropped on January 19, and while it has gotten some mixed reviews in the media, many fans (myself included) have fallen in love with it. While the album features some exciting new sounds for the group, the essence of Fall Out Boy, the energetic rebellion that fans love, is alive and well in the newest LP. “Champion,” the second track on the album for instance, has a sound reminiscent of their last two albums, “American Beauty/American Psycho” (2015) and “Save Rock and Roll” (2013) as does another popular title on “M A N I A”: “HOLD ME TIGHT OR DON’T.”

Critics argue that Fall Out Boy has lost some fundamental part of their identity with this new album, citing its pop music influences. And yes, some tracks, such as “Sunshine Riptide” and “The Last of the Real Ones” do carry a lighter tone, but in my humble opinion, the listening experience was still a good one, and the shift did not come out of the blue.

Long time followers of Fall Out Boy have surely noticed that, over time, the band’s sound has evolved, as do the stylings of every band with a running time longer than a social media minute. Bands, like all organic entities, are bound to change with time, as demographics age and evolve. Music is art, musicians are artists. If Fall Out Boy, or any other artist really, were to remain exactly the same in their productions, the outcome would be mechanical. The beautiful thing about art is that it is as alive as the artist who created it, or (especially) the human consuming it. Change and evolution are natural parts of life, so of course Fall Out Boy’s sound is bound to reflect that, and as a fan, I am willing to accept that.

I really enjoyed “M A N I A.” Before sitting down to write this article, I’d estimate that I’d listened to it at least ten times. The album is full of high-energy jams and exciting sounds, and the familiar voices of Stump and Wentz never fail to bring me back to the days of “Sugar, We’re Goin Down” (“From Under The Cork Tree,” 2005), and “Thnks fr th Mmrs” (“Infinity On High,” 2007)—the sounds of my punky heyday. For any fans of Fall Out Boy, or really high-energy music in general, I will recommend “M A N I A” for years to come.