Deborah Blum, Pulitzer-prize-winning author of “The Poisoner’s Handbook” and other books, was on campus Wednesday, Feb. 7, for a Contemporary Writers Series event that was co-sponsored by the Jane Hibbard Idema Women’s Studies Center. 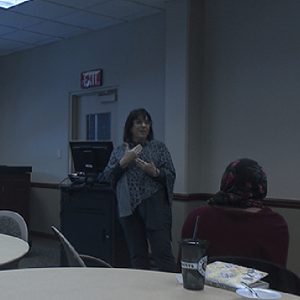 Facing a packed Wege Ballroom for the public event at 7:30 p.m., Blum did not read from any of her work. Instead, she became a book herself — an interactive one, with illustrations — as she spoke. She spoke of the frustrations and the rewards of her line of work in general, and also about her books specifically, such as “Love at Goon Park” — about the psychologist Harry Harlow and his research on love with baby monkeys as his subjects — and “The Poisoner’s Handbook” — about the beginnings of forensic science in America.

A slide show accompanied her talk, showing mainly vintage photographs, but with some cartoons also mixed in. The part about “The Poisoner’s Handbook” included a poisoning case she got the audience to solve, so this event came complete with a murder mystery party.  Blum spoke of her shorter e-book “Angel Killer” about cannibal and serial child killer Albert Fish, where she addressed the ethical problem of whether to simply punish such criminals or to scientifically analyze their minds for clues that might help us stop future criminals; ethical problems, both in science and in science journalism, were a recurring theme of the evening. She also spoke of her book “Ghost Hunters” which is about real, reputable scientists who studied paranormal phenomena. She even told us about her upcoming book “The Poison Squad” — coming in fall — about the history of the Food and Drug Administration. She said the reading at Aquinas was the first public event where she talked about the new book.

Earlier in the day, Blum spoke to an audience of 14 people about craft. She talked about how to structure a story in science journalism, starting with the classic inverted pyramid of a news story, the diamond of a magazine story, the full circle and the arc of rising and falling action, but then moved on to progressively more sophisticated structures, such as a broken line that follows a central character, but moves away every now and then to fill in the reader on the details of science; a zipper structure that interlaces two stories; a braid that interlaces three; and a spiral that repeatedly circles the topic, expanding its scope at every turn. She even spoke of the layered structure popular in creative nonfiction. However, she did not just present these structures as theoretical possibilities, but spoke about specific pieces in which they had been effective — in her own reports on primate research, for which she won the Pulitzer Prize in 1992, but also in the writings of many other authors.

At the end of her speech on craft, she asked each person in the audience their name, their area of study and their career goals. Blum gave each person career advice. The overall effect of this was that she was rooting for each of us, and my main impression was that she is not only a brilliant writer, but also an amazingly generous person.

The Contemporary Writers Series will return with Levi Romero on Wednesday, April 11, for the season’s final event.

Yashowanto Ghosh is a senior with a major in communication and minors in journalism and writing. Jasho is also an alumnus of Aquinas (B.A. German ’11).