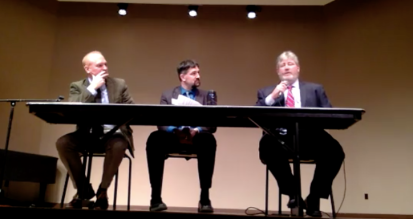 Only about 20 people sat in the AMC-Kretchmer Auditorium, but the forum was also streamed via the AQ Student Senate Facebook page. Questions were voiced by those present, as well as through Twitter and Facebook.

The first concern addressed was the status and plan of action for the college’s wireless internet. This is a concern that has been discussed in Student Senate meetings. President Quinn said, “We became aware of this as a serious issue in the fall … There was a student survey that was done in September and the number one student issue … had to do with the performance of the Wi-Fi.”

The solution, as stated by the president, is a costly one: “It boils down to our needing to get another outside vendor for the firewall.” President Quinn says this is happening at a time when there are open positions in ITS they want to fill — including the position of ITS director. Regardless, conversations are being held with different vendors.

“It’s something that we’ve talked about a lot … It’s not an easy fix, but they’re moving on it,” President Quinn said. As for when the college’s wireless internet will be fixed, that is harder to say. President Quinn expects it will be working properly before returning in the fall.

Advising, especially in relation to graduating on time, was another concern addressed. Dr. Barrows says planning what classes are needed to stay on track should be done ahead of time, and for certain majors this planning begins during the STAR sessions.

Regarding advising, Dr. Barrows said, “Take ownership of your path.” This can be done by using checklists and informing faculty advisors of interests. Additionally, the college is moving towards an automated degree audit system which would be accessible to students once a major has been declared. Dr. Barrows said the target for releasing the system was this fall, but he has to check this with the Registrar.

Dr. Barrows was asked many questions about the general education curriculum and what it includes; these are conversations that Dr. Barrows is accustomed to. If something from a particular course is approved, departments then ask, “Why do they get one of their courses as a requirement, but not our department?” There needs to be “a pretty good justification” before making something a requirement.

Dr. Barrows pointed out that there is no philosophy or St. Thomas Aquinas course required of students. When discussing what to include in the curriculum, some might say those courses are necessary.

“As we think about those things, perhaps we need to integrate a humanities slash philosophy course that would then fulfill that,” he said. Humanities was recently removed as a requirement, and its return as such is unlikely. Its removal was mostly due to cost.

When asked if money would be invested in the humanities as it is being invested in STEM programs, Dr. Barrows said, “In some respects, the STEM fields tend to be a bit more capital intensive and … investments in more of liberal arts areas is largely human resource investment.”

Although humanities courses are no longer required, they are available if students wish to take them. Similarly, it was asked if there has been any discussion of requiring a women’s studies intro course as part of the well-rounded liberal arts education. Dr. Barrows said he was not aware of a discussion about this, but “there is certainly an option to take a women’s studies course to fulfill … the social science section of the gen-ed.”

It was then asked that if such a course was not required, was there then a conversation taking place about making sure women issues were addressed in courses throughout all disciplines? “[It] goes back to a similar theme about how do you create requirements on faculty and how do they respond to those expectations,” Dr. Barrows said. For example, sustainability is something that they encourage professors to integrate into courses, but it can not be imposed. “We can’t impose that upon faculty members … but … we encourage that,” Dr. Barrows said.

Matzke provided St. Rose of Lima Hall as an example of this; the hall holds 74 students and uses the same energy as Knape Hall, which holds 16 students. “These things are done with intentionality, but they are not broadcasted,” Matzke said.

Dr. Barrows added that there is a green revolving fund: “… an endowment that is used to invest in sustainability projects and … it pays for itself.” Students are not usually aware of what the college does regarding sustainability; it was stated that perhaps there needs to be more pushing of these things.

Dialogue and diversity within the college administration were discussed. Dr. Barrows shared that in May there will be a three day seminar for faculty, staff and administration about this. Matzke added that diversity conversations within the President’s Cabinet have improved; he has been a member of the cabinet for four years. This improvement has been helped by creating a special position within the cabinet; Alicia Lloyd, director for the center of diversity, inclusion and equity, fills the position.

“We are a translucent bunch up here,” President Quinn said. “When I arrived here, it did strike me that … something about 15 percent of our student body is considered diverse. That was not necessarily true elsewhere on campus and the various ways in which those voices were to be heard — we weren’t using best practices with that.” The cabinet position was created to “have the voices there in the room.”

The inclusion of voices is a matter of including everything that is on the college’s mission statement. “It’s impossible for me to imagine a 21st century college, particularly a liberal arts college, that is not intentional in a lot of ways about what we mean about inclusivity, diversity and all that,” President Quinn said.

However, although the intention exists, sometimes forming a plan of action is complicated. Inclusivity and diversity were talked about last year in relation to the speaker and events committee. When asked if the bylaws proposed by former Dean of Students Dr. Andrea Wirgau had been approved, Provost Barrows did not recall the changes. The committee was referred to by Matzke as a “how committee,” not a censorship committee. There were concerns expressed by those present at the forum about how the committee works, and if there is a process similar to this one for accepting funding from controversial groups.

Inclusivity and diversity were also seen when asked if they could speak to what happened to the sanctuary campus initiative that was heard about last year. President Quinn said that although he arrived after the petition was made, the discussion about the initiative occurred at some length with different groups.

“This is something in great flux. … There is no real definition about what sanctuary means,” President Quinn said. “We’re just not in a position to be able to make that statement right now because we just don’t know what that means. … The goal is not to create a sanctuary; the goal is to make sure that the people that are threatened by these political and legal changes are made to feel as safe as they possibly can. …  These are folks who are primarily catholic, they are our friends and our neighbors — we have an obligation that we do all that we can to make them feel as safe as possible … that would include not sticking our heads up too high … It’s not an easy thing.”

Safety was also addressed in relation to lighting on campus at night and the functionality of emergency phones. Matzke reported that eight out of 50 phones are currently not working, at which moment President Quinn asked for the microphone and said, “That’s the first I’ve heard of this. Your safety is important. This just became a priority; they are going to get fixed.” He added, “We can’t have safety phones not working.”

In relation to safety, concerns were also raised about what is being done to hold students  accountable for acts of sexual harassment. An Aquinas Junior spoke about this by sharing their experience with harassment on campus; they were catcalled at night while leaving a front desk shift. The student reported the incident but heard nothing of it. Matzke asked to talk personally with the student, and said that judicial outcomes from title IX claims are not shared.

In regards to what can be done to educate students about this, Dr. Barrows said that, coming from a military background, he is used to constant training. He has been giving class briefings and said that perhaps “expanding the scope” of those to remind students about the information they receive during orientation might be beneficial. Sexual harassment is spoken about at orientation, but there is not much mention of this afterwards.

The forum allowed a space for students to voice concerns and be heard. Fiona Theodoroff, an Aquinas junior in attendance, said, “I think it’s really important to take the opportunity to dialogue when that’s presented to you.” 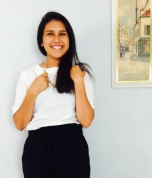 Valentina Garcia is a third-year student who loves sunny days, Jane Austen, and preferred tea to coffee until she started college.