The experience of a lifetime: Studying abroad in the Emerald Isle 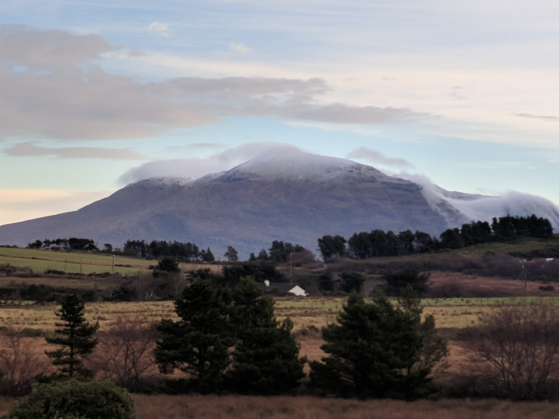 Studying abroad was one of the easiest decisions I made once I chose my college, but yet was one of the hardest to actually do. It was easy enough to say ‘Sure, I’ll go to Ireland for a semester!” and it was easy enough to apply and get in. What came later, however, was harder. There was the application to dozens of scholarships to help pay for it, the scramble for funds near the end, and more difficult than that was saying goodbye to family, friends, and familiarity for four months. But was it worth it? Totally.

Since January 8th, I’ve been studying abroad in Tully Cross, Ireland, which is a small town in the west of Ireland. It’s isolated, small, and so far from contemporary Ireland that it’s not uncommon to meet native Irish speakers. It’s been an absolute dream.

One of the best things about this area of Ireland has to be the landscape. It’s beautiful around here, and the sight of small hamlets nestled around soaring mountains and hills is almost like a painting. It feels wilder here than anything I’ve found in Michigan, and no matter which path from town you take, you’re sure to run into something worthwhile.

The people that live in those small towns are just as great as the scenery. We’ve had a partnership with the area for 45 years, so they’re well used to the presence of Aquinas College students. Beyond the quid pro quo of our financial dealings, however, the locals are actually interested in us, not just our money. I’ve never met a people more friendly and understanding than these. They’re eager to learn more about you and to actually make you feel welcome, and they’re just as eager to include you in their life.

For most people interested in going to Ireland, however, their chief concern will be the pubs. Rest assured, Angler’s Rest and Paddy Coyne’s, the two local pubs, are award-winning and absolutely stellar. Angler’s Rest (also called Sammon’s) is a lively place that has great prices, and every Wednesday hosts a pool tournament that you won’t want to miss. They serve food from open until 5 throughout your stay. I’d recommend the Full Irish breakfast, it was my favorite thing to get from there. Paddy Coyne’s, on the other hand, is a rowdier crowd. At the beginning of March, they also turn into a restaurant that serves from 5 to 9 p.m., and the food is pricey but entirely worth the cost. I recommend trying their cheesecake, if they have it!

Of course, we don’t just stay in Tully Cross the entire time. We frequently take trips to historical places around Ireland. We’ve gone to see castles, ruins, and ancient tombs that predate almost all others in Europe. We even spent a week in Northern Ireland at a place called Inch House. There, we learned about The Troubles (a period of terrorism in Northern Ireland), and took trips to see the places where it all happened. We went to Belfast and Derry/Londonderry, and spoke to people who were involved in The Troubles. We even spoke to former IRA and UVF members, who told us their story of why they joined up and the reconciliation process.

For Spring Break, you have the opportunity to travel around Europe or stay in Ireland as you wish. Some visited family during that time, a few people went to Rome or Amsterdam, and several stayed in Spain the whole week. I went with two people for break, and we managed to fit in London, Frankfurt and Paris into our week. This portion is what you make of it!

All that I’ve wrote up to this point has focused on the town, the land and the experiences you’ll have, and one might get the impression that there’s no actual studying involved in studying abroad. This isn’t true, but the classes that we do have are wonderful. In Ireland, you’re required to take Irish History and Contemporary Irish Social Issues, with a rotating course that depends on the Aquinas faculty. Those might sound like a drag, but they’re really not. Professors come in from the nearby college in Galway to teach these courses, and they’re wonderful. Their teaching style makes certain that you understand, rather than just know what they’re talking about, and their experience makes the class interesting and interactive. There are also optional hiking and internship classes, but I’d recommend taking them. The internship varies, and the hiking class is well worth it. You get in shape, get to go to many beautiful places, and it’s a great picture opportunity!

Finally, I’d just like to give some tips. Get outside of your comfort zone, but remember you don’t have to do everything. If someone asks ‘What’s the craic?’, they are not asking for crack. If you want someone to drive you somewhere, ask for a lift, not a ride. Be careful letting the woodys in for a party! A fancy dress party is simply a costume party. Discos are wonderful, and you’ll want to go. Finally, remember; this may feel like a different place and you can let your guard down, but you still have to be safe and have common sense. Don’t leave the keys in your doors, don’t trust total strangers, and always be sure someone knows where you are.

Studying abroad can be a life changing experience, just like it has been for me. Don’t let the price tag deter you. If worst comes to worst, it is entirely worth a little debt for the experience of a lifetime.