Homecoming 2018: An opportunity for Saints to gather

Homecoming 2018 was a weekend full of music, activities and history. From September 21-23, Aquinas College was ablaze with activity.

The weekend’s activities were open to students and alumni, and truly presented a mix of all ages and backgrounds. Events included soccer games, live music and a special homecoming mass.

Saturday also saw the greatest draw in alumni. Many took the opportunity to tour Our Lady Seat of Wisdom Chapel, which was built only a year ago. Many former students were seeing the inside of the building for the first time.

Along with chapel tours, a homecoming mass took place at 5:00 p.m. This presented a chance for visitors not just to see the chapel, but experience it. In the entrance hall of the building stood a series of signs listing alumni who had passed.

Outside the chapel stood the Main Stage Tent, the embodiment of the weekend’s festivities. Primarily used as a focus — a place to congregate — the tent became a landmark for visitors.

It was clear that Aquinas College had thoroughly prepared for the weekend. The tent area was walled off with fencing and housed several food trucks. There were also zero waste volunteers located throughout the area helping visitors to sort their trash.

This tent drew alumni and students toward it through its social atmosphere. The area was open to all ages, containing a special zone for “Future Saints” with activities for kids. 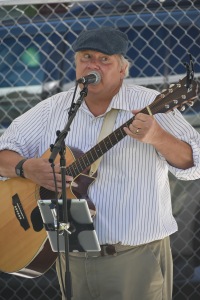 Live music came from a stage at the front of the area. Several bands played throughout the day, including the AQ Jazz Band. In honor of the 45th anniversary of Aquinas’s Ireland Study Abroad program, the event featured CrossBow, a Celtic band based in West Michigan.

Alumni could be seen throughout the tent, often deep in conversation. There was a casually social atmosphere to the place, as well as something deeper, more heartfelt. The younger alumni in particular found this time and place to be an incredible opportunity to reunite with friends.

Though many younger people congregated in the area, there was a great deal of age variation among visitors. Children of alumni could be seen all over, as well as their parents ranging from young adult to middle age. Additionally, many older former students attended.

Those mingling in the tent seemed to converse mostly about the past. They were full of nostalgia, lost in stories about their easy, carefree lives as students at Aquinas. They were also bursting with months, sometimes years, of stories to catch up on.

Homecoming weekend seems like a few days of parties, noise, sports, exuberance. This can’t be denied, but those are just the events that pass on the surface. Underneath is a great love and excitement for the people you miss, and that is what truly matters.