It should have been talked about as one of the greatest fights in UFC history. Khabib Nurmagomedov, the undisputed, undefeated, lightweight champion of the world defeated the UFC poster boy and former two weight world champion, Conor McGregor, in four rounds in the main event of UFC 229 in Las Vegas last Saturday. Instead it will be remembered for all the wrong reasons.

Khabib won the fight with a fourth round submission but immediately after the conclusion to the fight, the carnage started. Khabib climbed out of the octagon and jumped into the crowd to attack a member from McGregor’s crew, believed to be Dillon Danis. In the meantime, members of Khabib’s crew climbed into the octagon to attack McGregor. It was pure chaos. McGregor was led out of the octagon and back to his dressing room first. Dana White then made it clear, in no uncertain terms, that Khabib would not be presented his belt in the octagon for fear that it could lead to a full-scale riot.

Khabib in the crowd after attacking member of McGregor’s team

After the dust settled, Khabib spoke in his press-conference and apologized to the Nevada State Athletic Commission before questioning the media on the level of blame he was receiving, “This is not my best side. He talked about my religion, my country, my father. He came to Brooklyn, he broke bus and nearly killed two people. So why do people still talk about me jumping over the cage? I have shown respect.”

The bus incident that Khabib was talking about occurred in April in the lead-up to UFC 223 when McGregor and his team, seeking vengeance for an alleged incident between Khabib and McGregor’s team mate, Artem Lobov, attacked a bus with Khabib and some of his entourage on it. The attack, resulted in two of Khabib’s teammates having to pull out of UFC 223 through injury. McGregor avoided prison for that incident but he continued to verbally attack Khabib in the build up to the fight, targeting his religion, his father and Khabib’s relationship with Vladimir Putin, the Russian president. McGregor probably took it too far. It was questionable to goad a man who used to be able to out-wrestle a bear as a child! If ever anyone had a reason to be upset, Khabib did. However, there was no excuse for his and his team’s actions after the fight. 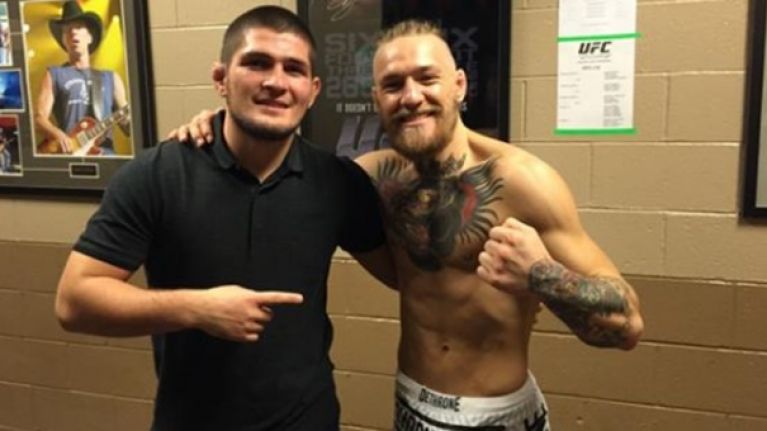 There wasn’t always bad blood between the fighters

But what about the fight itself? Khabib was good. Too good. He executed his fight plan to perfection. He took McGregor to the canvas for the majority of the first two rounds and began to execute his superior wrestling skills. Round two even saw Khabib land a stunning right over hand to send McGregor hurling across the octagon.

McGregor’s coach, John Kavanagh, told Joe Rogan in an interview on Rogan’s podcast that the fight was relatively going to plan through the first three rounds. The tactics for the first two rounds were just to survive the wrestling game without consuming too much energy before starting to demonstrate some of his stand-up game on the Russian. Round three gave McGregor fans hope and a bit of respite from the canvas for McGregor. He became the first ever fighter to win even a round against Khabib in his UFC career after taking the round.

Just when McGregor and his team were starting to feel confident that they could get back into this fight, it was all over. McGregor got taken down again but this time, got himself caught in a compromising position, allowing Khabib to get behind him and finish it with a neck crank. McGregor tapped and referee Herb Dean put an end to the bout early in the fourth round.

Khabib finishes the fight in Round Four by submission

McGregor has already stated that he wants a rematch and it will be very hard for the UFC to say no to their biggest star. Tony Ferguson definitely deserves a crack at the title too after defeating Anthony Pettis in UFC 229’s other main event. Maybe, a showdown with McGregor to see who fights Khabib next is a possibility? Watch this space.