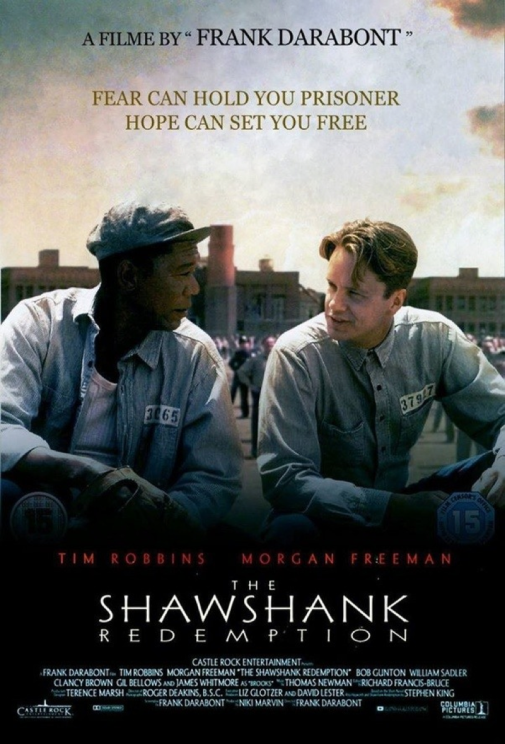 “Get busy living or get busy dying.” One really only has two choices in life, and when you realize that the rest of it is going to be spent in a brutal prison where there seems to be no hope at all, you realize the choice becomes something more complex than it once was.

That was the case for Andy Dufresne (Tim Robbins) in the movie “The Shawshank Redemption.” Andy’s future will be two consecutive life sentences for the murder of his wife and her lover, a crime he claims to be innocent of. So the young banker is sent to Shawshank State Penitentiary for the rest of his days.

The Penitentiary is run by the strict Warden Norton (Bob Gunton), a man who believes in “discipline and the Bible.” He runs a brutal and unforgiving place where prisoners are killed for speaking out of turn, a place where hope of the outside world is completely lost. This movie sheds a light on the reality of prison.

Andy sticks out like a sore thumb, though, because he has something that the other prisoners don’t– hope. Hope that there was life outside of those walls. He believes that hope was a good thing, something that no prison could take from you. The other guys see hope as a dangerous thing. The Warden sees Andy as an asset with his banking skills, a person who is good with money– a person who can hide the fact that money is being laundered and log the books to cover it up.

Andy has a chance of getting out, but the Warden will not have any of it. Andy then knows that there is only one way he is getting out of this prison, and that is to escape. But all he has is a small rock hammer he got from his friend Red (Morgan Freeman), a man who knows how to get things, and a poster of Rita Hayworth.

The young Tim Robbins’ portrayal of Andy is quite remarkable and he is a great fit for the role.  Robbins plays keenly into the fact that Andy is a quiet and pensive prisoner who has been wronged, but still has that hope he holds deep within himself. His character becomes friends with Red, a prisoner who has been in the system for a while. The attitude of carelessness and pessimistic views represents well the life of Red, who has become so used to his life inside prison. As he aims to figure out why Andy is so optimistic about leaving, Morgan Freeman, with his famously luxurious voice, narrates the whole movie from Red’s point of view and dives deep into the life of Andy Dufresne.

After watching this movie, one cannot help but dwell on hope. Andy had it when no one else did. He had it when everything, absolutely everything, had been taken from him. Andy teaches us that hope is in fact a good thing, something that is deep within ourselves, something that no one can touch. He teaches us that hope is a treasure locked from the inside, and that whatever comes our way we can always give a reason for our hope, especially in the darkest of places. Hope is what makes us get busy living, even when we feel like dying.

“The Shawshank Redemption” is based off of the novel by Stephen King, Rita Hayworth and the Shawshank Redemption. It is directed by Frank Darabront and produced by Niki Marvin. It is rated R, and was released in 1994. It was awarded the American Society of Cinematographers Award for Outstanding Achievement in Cinematography in Theatrical Releases, and was nominated for the Academy Award for Best Picture. You can find this movie on DVD.