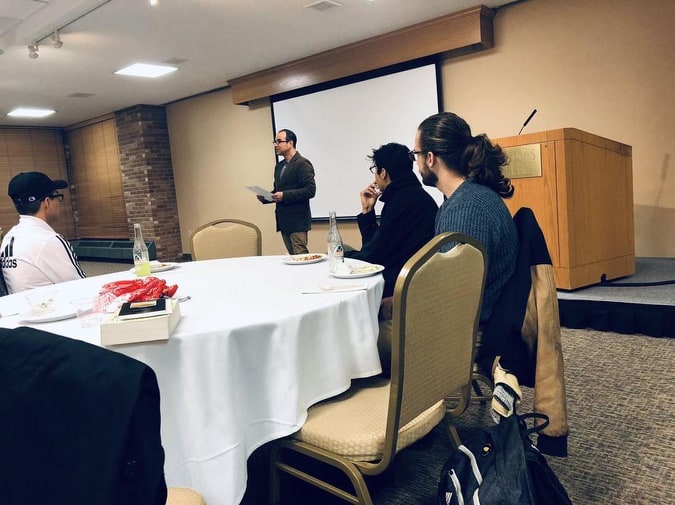 On Thursday Nov. 29, the Aquinas College Spanish Club held a Poetry Night at the Donnelly Center on campus.

The Spanish Club is a registered student organization on campus that brings together people who want to learn or have an interest in the Spanish language. This was the first time they held a poetry night for the students at Aquinas. It was a night full of food and entertainment.

The food they offered included beef empanadas, rice, beans, and chips and salsa as well as some limes, chimichurri and cilantro on the side. For dessert they offered conchas, a type of Mexican sweet bread. They had two options for beverages; Jarritos, which are a type of Mexican soda in various flavors, or water. Spanish music played in the background while guests waited for the poetry to start.

It was a bilingual event. Students were invited to share poems in both Spanish and English. It could be an original piece of work or one written by a famous author that they wanted to share with others. The club also had a couple of poems that students could choose from to read to the room. There was a sign-up sheet for those who wished to participate.

An Aquinas professor from the Spanish department, Shelli Rottschafer, gave an introduction to start off the poetry reading. Professor Rottschafer invited students to submit their poetry to the Sampler, an on-campus magazine, for an opportunity to be published. She also read a piece of poetry to the room. She chose to read “De Donde Yo Soy,” a poem by Levi Romero, a poet from New Mexico.

Various students performed original pieces. Darla Romero read an original piece inspired by her mom that was named “La Vida.” Then Sam Onkka, another student, read her piece named “Entre las estrellas.” The poem was about childhood memories and her grandparents. Next was Dominique Foley, who read her poem “Las Gemelas/ the Twins.” She read each stanza first in Spanish and then in English.

Professor Bedere decided to perform a piece by Arthur Rimbaud, a French poet, in its  original language. Then he read the translated version of it in English, which revealed that it was about a soldier.

Dr. Romero performed a poem by Sabine Ulibarri, another poet from New Mexico. His piece “Quien Eres?” questions who the narrator is and where their future is headed.

The event concluded with a couple different videos of slam poets. Some of the videos they showed included Elizabeth Acevedo performing her poem “Afro-Latina” and Cristina Martinez performing “Chicana.”

For more information about the Spanish Club, visit their Facebook page.