Transgender Ban in the Armed Forces

On Tuesday, February 22,  by a 5-4 vote, the supreme court lifted two injunctions that were preventing the ban on open transgender military service implemented by President Donald Trump however, another nationwide injunction remains in place for now.

The execution of this ban was announced in March 2018 by the Trump Administration and was created with collaborative efforts from anti-LGBTQ advocates. This ban was announced with efforts to avoid constitutional flaws by grandfathering in transgender individuals who were already openly serving. The execution of the ban was the action of the plan Trump first introduced in July 2017 on Twitter. 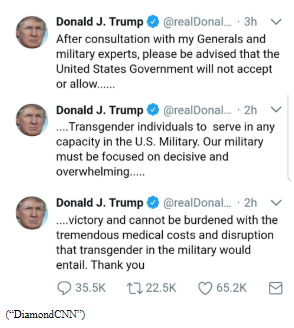 One month later, he tasked then-Secretary of Defense James Mattis with the creation of an “implementation plan” for the ban. Months after that,  the policy was blocked by four federal courts. They concluded it was “arbitrary, unwarranted, and a denial of equal protection.”

While this may be the first time we’re hearing about an attempt to ban transgender individuals from the US Military, it has been an ongoing issue for many years.

In 1963, by Army regulation 40-501, individuals with gender issues were officially prohibited from the United States Military and the policy reasoned transgender people were “medically unqualified to serve because their mental state was considered unfit.” If someone were to undergo any type of gender transformation they would be discharged or rejected from enlistment. Though this went on for some time, the policy was taken to court in the case Doe v. Alexander in 1981. The army defended their policy of rejecting the enlistment of transgender individuals by stating they would raise a medical problem.

Six years later, in the case Leyland v. Orr, Air Force member Leyland had gender reassignment surgery before being discharged. This was ruled valid by the courts due to the reasoning that Leyland was unfit physically rather than mentally. This judgment was determined by inferring that “genital surgery is similar to an amputation surgery, which leaves the individual unable to meet the demands of a soldier.”

Sage Fox was the first openly transgender person to serve in the military however, it did not start out that way. She enlisted in 1993 and served for nearly 19 years before moving to the reserves. She then took time off from the reserves to legally transition from male to female. That next year she was reactivated and told her commanding officer that she would not be returning identifying as a male. The military could not legally discharge her, so she served for two weeks before she was ordered to be placed on the inactive reserve. She suspected it was due to her gender identity. She did not receive disability, but her medical records did not deem her unfit to serve.

In March 2014, an advisory panel organized by the Palm Center, a research center based at San Francisco State University, released a report that stated:

“We determined not only that there is no compelling medical reason for the ban, but also that the ban itself is an expensive, damaging and unfair barrier to health care access for the approximately 15,450 transgender personnel who serve currently in the active, Guard and reserve components. Medical regulations requiring the discharge of transgender personnel are inconsistent with how the military regulates all other medical and psychological conditions. Transgender-related conditions appear to be the only gender-related conditions that require discharge irrespective of fitness for duty.”

This was going to be a long battle and many people were not shy about how they felt.

Dr. Ash Carter shared his thoughts on his first trip as Secretary of Defense in February of 2015 at the Troop Event in Kandahar, Afghanistan.

“… we want to make our conditions and experience of service as attractive as possible to the best people in our country. And I’m very open-minded about [it] — otherwise about what their personal lives and proclivities are, provided they can do what we need them to do for us. That’s the important criteria. Are they going to be excellent service members? And I don’t think anything but their suitability for service should preclude them.”

Army chief of staff stated in agreement with Dr. Carter, that “The United States Army is open to all Americans who meet the standard, regardless of who they are. Embedded within our Constitution is that very principle, that all Americans are free and equal. And we as an Army are sworn to protect and defend that very principle. And we are sworn to even die for that principle. So if we in uniform are willing to die for that principle, then we in uniform should be willing to live by that principle.”

In 2016, Obama repealed the transgender ban and Sage Fox was working with the medical board and was expected to be re-enlisted.

In June 2016, asked by the Office of the Under Secretary of Defense for Personnel and Readiness, RAND National Defense Research Institute studied the implications of transgender individuals. They estimated that;

” 2,450 active-duty and 1,510 reserve personnel were transgender. Based on the percentage of transgender people seeking gender transition-related medical treatment using private health insurance, RAND further estimated that 29 to 129 active-duty service members would seek transition-related health care benefits per year, increasing military health system costs by 0.13% of the $6 billion military health system annual budget, at a total annual estimated cost of $2.4 to $8.4 million. Readiness was estimated at a decrease of 0.0015% of total available labor-years due to recuperation, and unit cohesion was determined to be minimally affected. The RAND study focused on the service history of transgender personnel in Australia, Canada, Israel, and the United Kingdom, concluding that “in no case was there any evidence of an effect on the operational effectiveness, operational readiness, or cohesion of the force.” RAND concluded that calling for “strong leadership support”, providing diversity-related “education and training to the entire force”

In June of 2016, Secretary Ash Carter announced Directive-Type Memo 16-005 and it immediately declared “no otherwise qualified Service member may be involuntarily separated, discharged or denied reenlistment or continuation of service, solely on the basis of their gender identity and it is the Department’s position, consistent with the U.S. Attorney General’s opinion, that discrimination based on gender identity is a form of sex discrimination.” The policy follows with a more specific plan to be implemented in future months. It also required that an individual had received any gender transformation treatment deemed necessary by a doctor. They also had to be certified stable for 18 months before being able to serve in the military.

After President Donald Trump’s tweet announcing the renewal of the ban, on August 1, 2017, the Palm Center released a letter signed by 56 retired generals and admirals, opposing the proposed ban on transgender military service members. The letter included a statement that said the ban would “cause significant disruptions, deprive the military of mission-critical talent and compromise the integrity of transgender troops who would be forced to live a lie, as well as non-transgender peers who would be forced to choose between reporting their comrades or disobeying policy.”

At the end of the month, on August 25, President Trump signed a presidential memorandum that identified the guidelines for renewing the ban. This reversed President Barack Obama’s policy that allowed transgender men and women to serve openly and be granted funding for gender-reassignment surgery. In the memo, President Trump reported that the ban on transgender personnel in the military will remain effective until “the Secretary of Defense, after consulting with the Secretary of Homeland Security, provides a recommendation to the contrary that I find convincing,” ignoring the conclusions of the 2016 RAND study.

This raises concern for everyone, regardless of gender identity. It is only the first step toward excluding individuals from serving their country. While President Donald Trump ignored the results of the RAND study conducted in 2016 and then stated that he will wait for something more convincing, we can wonder what his definition of “convincing” really is.

The renewal of this ban is not only going to prevent thousands of transgender individuals from being able to enlist, but it is also going to push away those who support the LGBTQ community. It is telling those individuals that want to feel comfortable in their own skin that they can’t serve the country that is supposed to allow them to do so. It has already gone to court and has started yet another long journey to a final decision and from what we’ve seen so far, our President will do whatever it takes to get desired results.

Laura Durso, Vice President of the LGBT Research and Communications Project at the Center for American Progress stated ““This is the cruel centerpiece of the Trump administration’s agenda to prevent the full inclusion of transgender people in public life,” Durso said. “It undermines military readiness and perpetuates the fear across the transgender and allied communities that this government will not protect them, not even those who would sacrifice everything to protect our nation.”