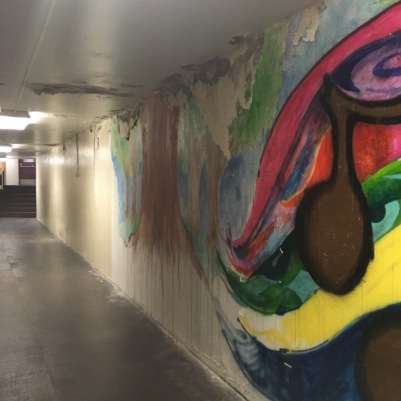 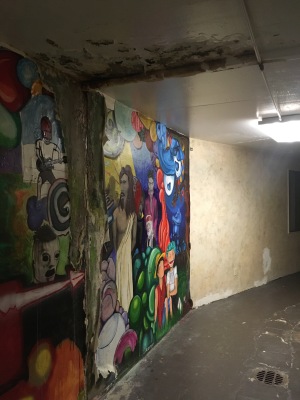 Those who know and love the mural of Willie Nelson weeping tears of acid that decorates the wall of Wege Tunnel may never see him again. The tunnel, which connects Wege Center and the Academic Building, has been closed indefinitely due to safety concerns.

According to Ryan Wendt, Campus Safety’s locksmith and member of the Aquinas College Historical Commission, the tunnel was constructed along with the Wege Center in 1964-65. It was necessary to connect water pipes, steam heating pipes and wiring between the two buildings; a corridor for people was an added benefit.

Two trees were planted outside of Wege Center soon after, and over time their roots began to penetrate the tunnel’s foundation. This caused the tunnel to leak after heavy rains and, as years passed and the cracks grew, every time it rained. Students who used the tunnel were familiar with the puddles, damp air and peeling paint inside as a result; some were suspicious that there might be mold throughout.

These trees eventually died and were taken down, but the damage had been done and continued to spread. 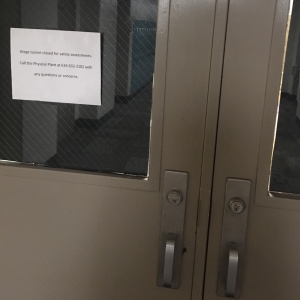 The doors to the tunnel remain locked / Courtesy Elizabeth Walztoni

Due to these and other concerns about its structural integrity, the tunnel was locked on Dec. 21, 2018. The Physical Plant has obtained price quotes for several degrees of repair to the tunnel, which range from $100,000 to $310,000.

At this time, it is uncertain whether the tunnel will be repaired and reopened. Chief Financial Officer Lisa VanDeWeert says the project has been included in the campus deferred maintenance plan. This plan presents a number of campus improvements to management members and the Finance Committee for review of how they should be prioritized.

Students expressed disappointment at the tunnel’s closure, both because of the convenient route between buildings that it offers and the shelter from the elements that it provides during the winter months. However, VanDeWeert said that she wants students to know that the decision was made with concern for their safety.