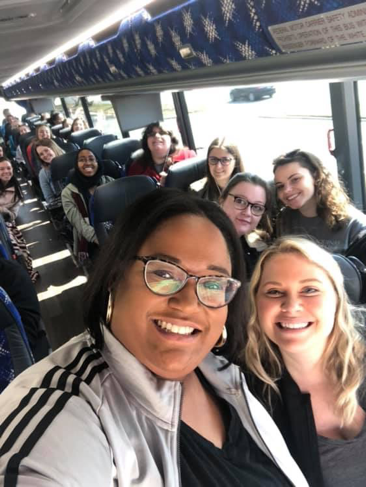 Saturday, April 6, was just like any other day for most students, except for those who attended the Detroit Day Trip offered by CORE (Center for Opportunities, Resources, and Excellence) and CDI&E (Center for Diversity, Inclusion and Equity).

A group of 39 people, including both students and faculty, loaded a bus at 9 a.m. on Saturday to begin their day in Detroit. First up was the Charles H. Wright Museum of African American History. This museum was a favorite of many. Junior Alyssa Pickle enjoyed learning  about slavery while walking through the ship exhibit. She says, “Everyone got quiet at the same time, you could tell we were all imagining it and feeling the weight and severity of it. It felt very monumental.”

Included in the ship exhibit were exhibits for the agriculture and minerals of Africa, clothes and other fabrics, food and culture, and their rise in America.

Sierra Howes, Senior, touches on the importance of attending this kind of trip: “I think learning about different cultures and just getting that multicultural learning helps people see the world a different way.”

The second stop of the day was the Motown Museum, where the group learned about the many famous artists that recorded in that very building. These artists include Marvin Gaye, Stevie Wonder, Diana Ross and the Supremes, The Jackson 5 and many more. The group was able to dive into the family of Berry Gordy Jr. and the history behind Motown records.The group finished their tour with the singing of “My Girl” in the recording studio.

Mallory Miller, Student Engagement Coordinator at the Center for Diversity, Inclusion, and Equity, is relatively new to Aquinas. She helped put this event together along with Alicia Lloyd and Dondrea Brown. She was very excited to see the group of 39 exceed her expectations of 25.

Buddy’s Pizza was the last stop on the Detroit Day trip before heading home. Stomachs were full of pizza, pasta, salad, and for some, cheesecake.

Here’s more about what the group had to say about this trip:

“I would definitely come back and explore more on these trips and  learn things I’ve never learned before.” “- Hannah Roest

“It made me very grateful for what I have today and for all the people in the past and present who made that possible.”-Toni Mulder

“We are so thankful that Dondrea Brown of CORE co-sponsored this trip with us and helped to make it a reality, we are already starting to discuss plans for a D.C. trip next year!”- Mallory Miller

If you’re interested in learning about other trips with CORE or CDI&E, visit aquinas.edu.