Thank u, next (a letter from your editors)

As editors of The Saint, we’ve learned a lot. Valentina has been News Editor for three years, Kirsten has been an editor for two, and Shane has carried the sports section for a year. We’ve made the transition to a completely online newspaper and brainstormed ideas to keep us relevant and engaging. We’ve had events, an active facebook, and a hit album… (or maybe not the last one, but we have published many stories). Since this is our last issue, we wanted to share what we’ve learned with our readers.

One taught me integrity

Before I started working at the Saint, I didn’t think about the word “integrity.” After working with the amazing team of editors at The Saint, I’ve come to look for integrity in myself and the world around me. Working for The Saint has taught me the importance of honesty; as a reporter, I knew that I could tell my editor if something was going wrong. As Editor-in-chief, I know I can go to my team of editors if I have a question, or any doubts.

I hope the editors and writers, as well as the wider campus community, think of me as someone who tackled her job with integrity and enthusiasm. I hope that everyone else, whether you work for The Saint or not, does the same.

One taught me engagement. 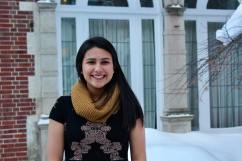 There’s few opportunities on campus that let you get involved with many things without feeling overwhelmed (not because being involved with more than two RSOs — or three — is bad, it can just be, well, overwhelming). Being part of The Saint was one of those unique opportunities. Yes, The Saint played an important role in my journalism experience — but the most valuable experience had nothing to do with my minor: The Saint helped me become an engaged student.

Staying connected is important. Helping others stay connected is even more important. The Saint really needs this right now. It’s hard to think about what I’ve been a part of in these past three years without thinking about the stories that were missed, the ones that remained in bold on our story doc. Write letters to the editor, commit to writing an article, pitch a story.

The Saint isn’t just here for the journalism minors. It’s yours.

One taught me passion 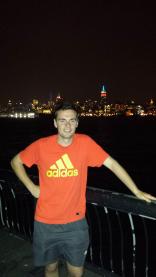 If there’s one thing the Saint has ingrained into me over the past couple of years, whether it be as a reporter or an editor, is to seize the opportunity to do something you love. For me, it was reporting on sport. For you it could be anything from politics, local events, to a review of a movie or album that’s just been released.

Reporting, interviewing and writing about sport is something I’ve wanted to do since I was ten years old. I’ve written numerous personal articles over the years that have been lost in the doldrums because I wasn’t confident enough to showcase one of my greatest passions. Working with the Saint has allowed me to unearth that confidence and it might just be the most important thing I take away from my time at Aquinas.

The feeling of having your articles published is something I am overwhelmingly proud of and I urge anyone with any desire for reporting to try it, even once. You might unearth a passion you never knew you had.

We might be graduating and moving on to the next step in our lives, but we’ll never forget our humble roots starring in Victorious… we mean The Saint.

We’re all so excited for Elizabeth Walztoni, a staff writer and goat whizz to fulfill the role that has been held by Valentina for so long. Anna-Jo Stuart is your thoughtful new opinion editor, while the sports section will be in good hands with newcomer Kaitlin Goodenough. Elizabeth Schoof is stepping up into the Editor-in-Chief role, and we know that The Saint will thrive under her punny and kind leadership.

We’ll be watching you guys make the Saint happen from an eager, always cheering audience.