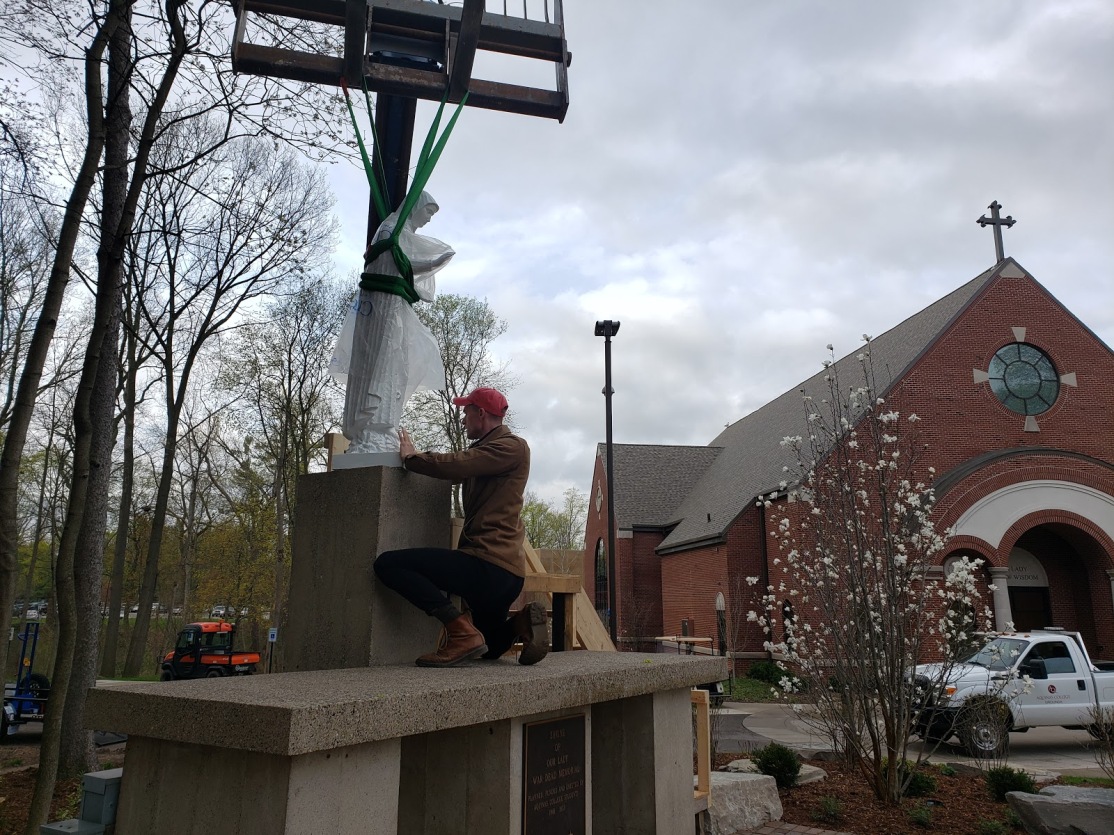 Statue of Our Lady of Fatima returns to Shrine for May 1 crowning. Photo courtesy Ryan Wendt, Aquinas College Historical Commission

May crownings are a devotional practice undergoing a revival, including on the Aquinas College campus. The revival coincides with the announcement that the College’s Catholic identity is a guiding principle of its 2030 vision.

In the past, May crownings at Aquinas have been organized by students. This year, the Office of Advancement and Campus Ministry organized the May Crowning and Blessing on May 1. The event became a priority for the College due to the generosity of John and Sarah Jackoboice. The couple funded the renovation of the grove on Holmdene lawn where the statue of Our Lady of Fatima sits. The renovation influenced the tradition’s revival.

“Certainly when you renovate a space, it makes a big splash, ” Theresa Marshall, assistant director of Campus Ministry and liturgist, said.

Besides the renovation of the grove, the statue of Our Lady of Fatima underwent a restoration. The splash, however, is best seen through the response to the May 1 crowning. There were 175 guests from St. Thomas the Apostle and St. Stevens schools alone.

Marshall hopes Aquinas students will reclaim this event as their own in the future.

May crownings were popular in the time after World War II and before the Second Vatican Council. According to the Aquinas College Historical Commission, the first crowning on campus took place on May 1, 1948 with the beginning of a Marian Congress. Florence Wattson, a senior student, was elected maid of honor and crowned Our Lady of Fatima. This year, Allie McConnell, an Aquinas student who joined the Catholic church this Easter, will crown the statue.

Not all elements of those crownings, such as Marian courts with a maid of honor, are returning. And if they do, they’ll be redesigned. For example, a Marian court today would probably include men, which didn’t happen in the past. Marshall says the tradition is reemerging, but it’s doing so for the 21st century.

“After Vatican Council II there was renewal of the liturgy and a lot of devotional practices were kind of just set aside. And there’s a lot of lament about that … What you see now is we’re retrieving those things. It’s like a family putting things away in an attic, and then the next generation coming, going up and exploring and going, ‘What’s this? I think I’ll bring it down.’ It’s kind of like that, when you’re going through grandma and grandpa’s stuff,” Marshall said.

The tradition might be brought down from the attic because Our Lady of Fatima’s message resonates. The Shrine of Our Lady of Fatima was built in 1950 as a memorial for Aquinas students killed during World War II. The worries of 2019 are different, but they exist. Our Lady of Fatima brings a message of peace, conversion and penance.

The apparitions of Our Lady of Fatima occurred in 1917 and prepared people “to hold close in their faith in times of trial and duress,” Marshall said.

The renovation of the grove will allow for the consolation of Our Lady to be felt while students use the area to pray over their personal worries.

The area is still in renovation; five foot trees are being brought in after the blessing. But Marshall believes consolation and renewal have already been felt.