Aquinas Women’s Volleyball holds an overall record of 11-11 after taking a tough loss in a four-set battle against Indiana Tech last week. They currently sit at 8-5 in WHAC play.

The Saints have three upcoming home matches in which they will fight to bring home a few more conference play wins.

The first match will be on Friday, Oct. 25 at 7 p.m. against Lawrence Tech.  The next day, Saturday, Oct. 26 Aquinas will take on Rochester College at 1 p.m.  The Saints will then face Concordia University the following week on Wednesday, Oct. 30 at 7 p.m.

Overall, the team is currently averaging 11.5 kills per set with a grand total of 1037 kills for the season.  With 237 kills, junior Kylie Christensen leads the team in kills followed closely by junior Payton Klein with 223 kills. 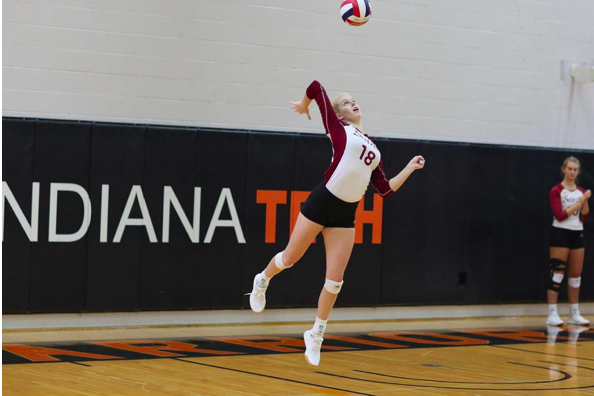 The Saints have a season total of 962 assists, of which 811 belong to Kali Crawford.  The team sits at a total of 153 aces for the season.  Payton Klein, Karly Morris and Meredith Kraus have contributed 21 aces each to the season total. Ally Blackford with 20 aces and Jackie Rozell with 19 aces have also contributed.

Karly Morris leads the team with the most digs at 408.  Overall the team has a total of 1340 digs.

AQ Saints go up for a block against UNOH

Aquinas is averaging two blocks per set this season with a total of 179 blocks. Payton Klein leads the team with 81 blocks, followed by Kylie Christensen with 79 blocks.

Come support the Women’s Volleyball team at the Sturrus Center Friday and Saturday or watch them live on the AQ Sports Network!