Going into Aquinas’ “Rocket League” match with Northwood, both teams were at an impressive 5-0 in the Great Lakes Esports Conference (GLEC) league standings. Aquinas was at the top of its game, winning its most recent match against Mount Union with a sweeping 3-0 lead. Playing against Northwood, the Aquinas team knew they would have to be at their best in order to compete well. They succeeded in this regard, but it just wasn’t quite enough.

If you’re not entirely familiar with the video game “Rocket League”, it’s really quite simple. The game is played very similarly to that of soccer, but rather than having a dozen players running up and down the field, the entire team consists of three rocket-powered cars. While the giant soccer ball is pushed back and forth between either end of the massive in-game field, players can launch their own cars into the air, along the walls, and even into other opposing players. That last option results in a “Demolition”, eliminating the enemy player from the game for a short amount of time.

Aquinas’ Rocket League team is comprised of three players; “Samson”, “Stocks”, and “CAD3” (pronounced “Cade”). While all three of these players demonstrated a high level of skill during the match against Northwood on November 2, it was Samson and Stocks who led the Saints’ charge on the field.

Matches in competitive Rocket League are best of five, meaning it is the first team to reach three game wins that wins the match. Aquinas began the match aggressively, taking game one and leading the series 1-0. Northwood took game two, with its star player, “AMP”, taking a hattrick as well (three goals in a single game).

Aquinas knew the third game would determine the rest of the match, so they went all out with their offensive plays. Most notably, Samson managed to make a continuous three-touch assist to Stocks’ goal at 3:32 left in the game. Northwood managed to steal game three, but its team could now see Aquinas’ potential in the offense with twelve total shots for the Saints in game three.

Game four showed the impressive strategies of both teams. Northwood dominated the ball throughout the game, but Aquinas’ defense was impeccable, with Samson guarding the net successfully with two demolished teammates at one point. Stocks managed to steal a goal from Northwood, and the Saints took game four.

It all came down to game five, and both teams knew the level of play that it would demand. Two goals for both teams were scored throughout, with Samson securing both of Aquinas’. It went into overtime, where the next immediate goal determined the match winner. With +1:07 in overtime, Northwood took the final goal and won the match. 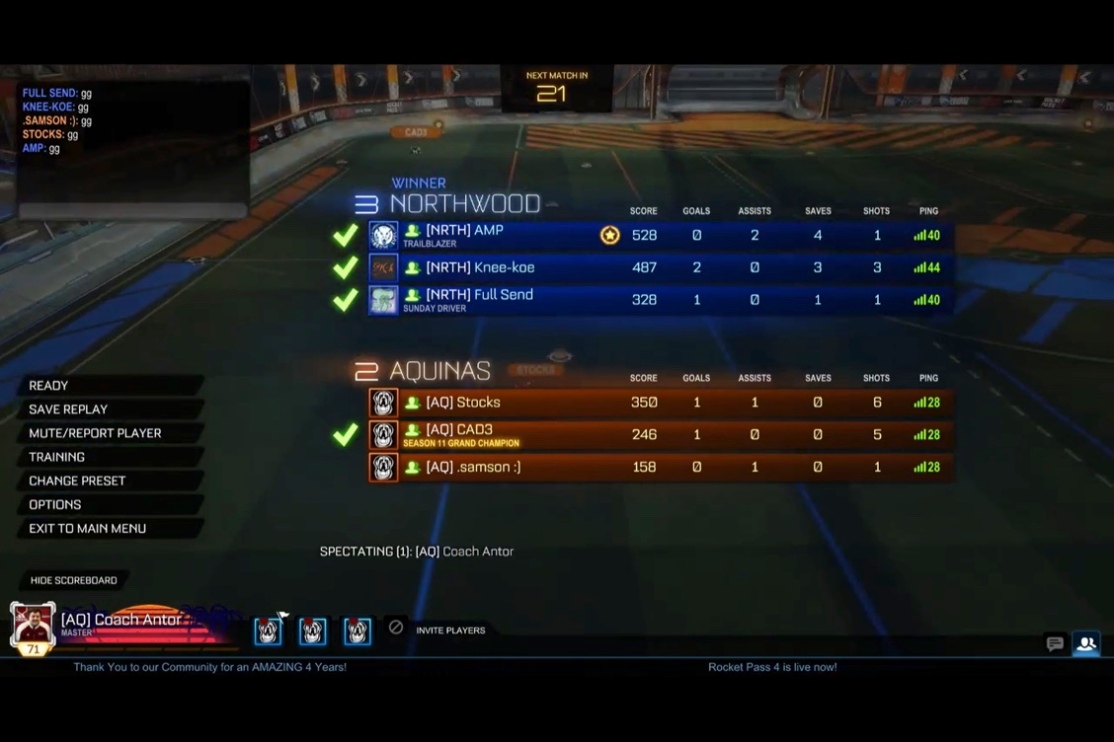 While Aquinas lost its 5-0 streak against an experienced rival, the Saints showed what seemed to be its best plays yet. Going into the playoffs for the National Association of Collegiate Esports (NACE) league, the Aquinas’ Rocket League team will no doubt be taking the lessons learned from the match against Northwood to the rest of the season.

If you would like to stay up to date with all things Aquinas Esports, feel free to check out its live-stream channel at twitch.tv/AquinasEsports