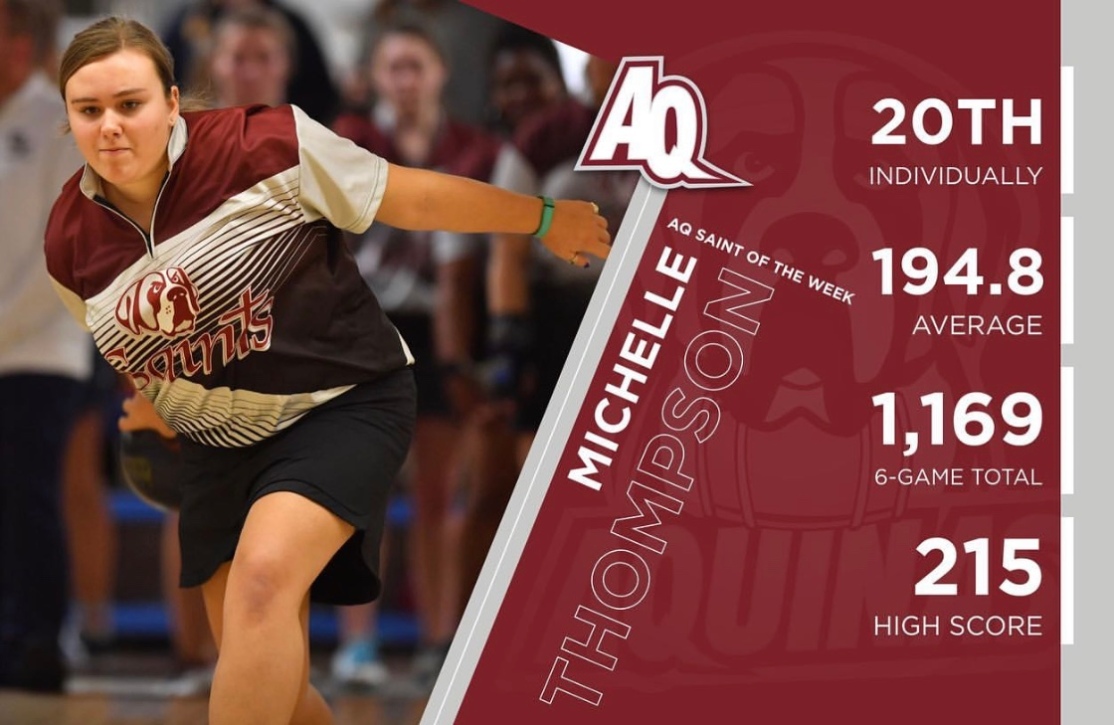 Aquinas’ Women’s Bowling team member, Michelle Thompson was named Saint of the Week last week as she bowled four 200+ games.  She also was the high finisher on the Saints team at the National Match Games.

Some other accomplishments since Michelle has been bowling for Aquinas include placing 48 out of 226 women at the 2019 Sectionals Qualifier and earning Scholar Athlete during the 2018-2019 season.

Michelle stated the women’s bowling team is doing well, but can always improve.  She said the team seems to be leaving more spares to shoot, which can make it more difficult to win tournaments if the team is not able to hit those shots.

“The freshman girls we have are doing well for their first year, and everyone else is still trying to improve no matter how well they are doing.”

Michelle started bowling in a youth league around five years old, however, she’s been practicing since she could walk.  She would bowl with plastic toys at a young age, inspired by her father who also bowled.

Michelle is a second-year student majoring in Biochemistry and Molecular Biology as a Pre-Med student.  She plans to attend graduate school to become a doctor in a hospital for pediatric patients.  Her knack for caring for children developed as she belongs to a large family with many younger cousins who she grew up looking after.

Michelle chose Aquinas because she was looking for a smaller college in which she wouldn’t feel lost.  “The last time I visited AQ was actually after watching the team bowl 30 minutes away.  I was driving with my family and asked if we could drive through campus. When we did, I had a feeling this was where I should be and said, ‘This is it.’”

Outside of bowling, Michelle is an Insignis student who is involved in many clubs.  She participates in the Aquinas Chemistry Society, TriBeta (Biology group), and the AED Pre-Health Club.  She also runs athletic study tables for freshman and transfer athletes. Some of her hobbies include reading, baking, camping, singing, crocheting, dancing and volunteering. Michelle also enjoys photography and movie trivia. 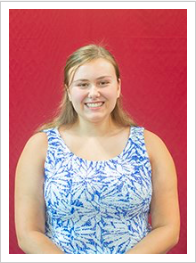 Pre-shot routine: “I wipe my ball, relock my thumb slug (my thumb hole is removable so I have the same feeling from ball to ball), dry my hand as I wait for the lanes around me to clear, step up to the approach line up the instep of my left foot, check my line, put my hand in the ball, bend my knees, rotate my wrist to the proper angle while looking at my target and go.”

Pre-game drink: “I always have a pop of some type but I definitely prefer Pepsi while bowling.”

Favorite bowling memory: “My first year bowling for AQ during practice at Westgate, I was shooting strike after strike and it was just my teammates and me having a good time. Then we realized I had the front seven frames strikes. At that point, my coaches were watching and asking “Now why can’t this happen during a tournament. I threw my next shot and I left a hard 8 pin. Everyone, including my coaches, said that it wasn’t fair because I had thrown a perfect shot. I was a little disappointed but not much…until I ended up finishing the game with three more strikes and a four pin (this time it was my fault for sure). I could have gotten a 299 game but instead, my new highest is 278.”

Athletic role model: “I would say good role models of mine are my coaches. This includes Dave Spohn, who works at Royal Scot Golf and Bowl Center. I have been seeing him to get my ball drilled and have lessons ever since I can remember. I also want to thank my current coach, Charlie Tapp because right before this tournament he and I had been working really hard on a new roll for me and this is what helped me the most to do really well this past weekend.”