With the recent decision to move to distance learning for the rest of the Spring 2020 semester comes the cancellation of many important events for graduating seniors. For students in the Music Department, this may include senior recitals.

Dr. Tom Polett, Interim Director of Instrumental Music, noted that some students were able to perform before the college switched to distance learning, some have recorded performances without an audience, and some have decided to postpone these recitals until a later date.

Senior Svetlana Djirackor plans to post her recital on YouTube instead of holding a performance with a live audience. She will post the separate pieces as different videos and is considering filming each at different sites on campus.

Stephen Rumler’s senior piano recital will also be posted on YouTube. He will film at Immaculate Heart of Mary in Lansing, with only one or two people in the live audience.

Rumler said, “It will be strange sitting down at the keyboard, only to be seen and heard by the camera at that moment. But I think more than ever, the arts are a beacon of hope for people who are confined to their homes, and allowing people to view it virtually will be ministerial and beneficial in numerous ways.”

Barbara McCargar, Chair of the Music Department, commented, “We’re going to use the word ‘challenging’ until it’s worn out, I think.”

Not only have most of the senior recitals been postponed, but so have concerts like the Honors Recital and the Concerto Competition. McCargar said they are tentatively planning to reschedule these concerts for the Fall semester, with the rescheduling of recitals as a top priority.

McCargar also named the shift to distance learning as one of the challenges. Music classes and voice lessons don’t translate flawlessly to Zoom calls. “[Technology] is easier than anyone thinks, you just record it and upload it to YouTube, what’s easier than that?” She said. “But I’ve said to my singers, what might be working this week might not work in four or five weeks.”

Recorded accompaniments don’t lend themselves to musicians who might want to slow down or speed up pieces. And, as McCargar pointed out, “You can’t expect some ordinary accompaniment to match exactly what’s in your head.”

The end of this semester will not have the same tone as previous ones for the Music Department. McCargar said, “I hope we can, in some way, as a college and as a community, celebrate the accomplishments of our class,” but she knows that they still won’t have the normal celebrations they should have had.

However, she has hope for the future. “The music department is a group of very optimistic people, and that helps,” she said. “My faith tells me that there’s something on the other side of this. I’m not sure what it is. God knows what it is. But there’s going to be another side.” 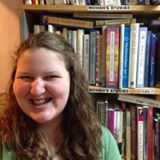 Bridget Gibley is a senior at Aquinas studying English, Spanish and Women’s Studies. She thrives on reading, writing, and lots of coffee.