Standing together: The Class of 2020 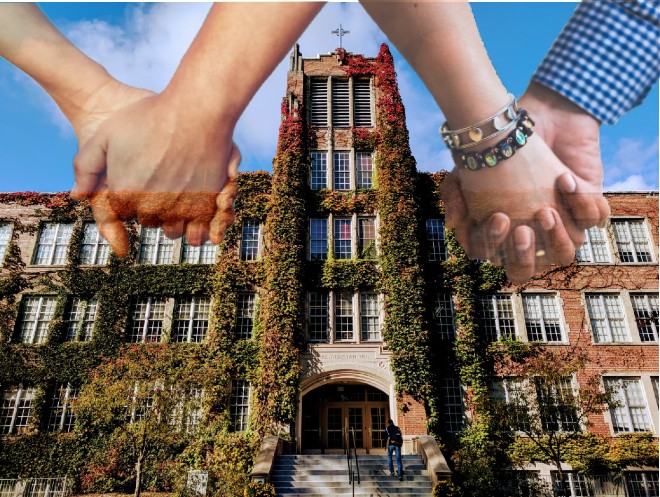 I know that I’ve joked a lot over the past four years about how nice it would be if I didn’t have to go to class, but I never thought it would happen— especially not under these circumstances.

The last semester of your senior year of college is probably the most important time of your undergraduate career. I expected to spend it working on my final research projects and presentations, hanging out with my friends as much as possible and giving one last “thank you” to the faculty and staff who have helped me get through school. Three weeks ago, there was no doubt in my mind that I’d be walking across the stage in May. Now? Graduation has been postponed, most of my research presentations have been canceled, and my friends are spread out across the country. It was not the goodbye that anyone was imagining, and while social distancing and quarantining are absolutely what’s best right now, I’d be lying if I said I wasn’t heartbroken. I know that I’m not alone.

The loss that we’re experiencing is difficult, but I think that the responses that we’ve received make it even worse. I’ve heard so many people from the generations before ours say that we need to get over ourselves. They say there are lots of people who are missing out on things right now. Who are we to mourn? Our generation is the one that’s had everything handed to us. It’s no wonder that we’re selfish. The world is falling apart and we’re upset that we have to go to school online?

The people saying these things are wrong. There is no reason for anyone to be comparing the amount of hurt and pain people have experienced. It isn’t going to make this situation any better. Our loss is valid. Our hurt is valid. It is absolutely okay for us to be upset. We didn’t just lose our final weeks of college. We lost the final transition into adulthood. I know that a lot of people would say that you’re an adult when you turn eighteen, and that’s true, but the last few weeks of your senior year of college are the final transitioning points into the real world, and they’re important.  Ours didn’t get rushed. They got thrown out the window altogether.

The first steps we’re taking out into the real world are under the heavy cloud of a global pandemic, an impending recession, and the general stereotype that our generation is lazy and selfish. The world is in a dark place right now, and I think everyone can agree that things are not being handled well.

We’ve spent the last month watching the generations before us try and tackle this mess, and while the majority of people are doing their best, there’s still room for improvement. The president threatened to withhold resources from any state that doesn’t “appreciate” the help that he’s providing them with. It’s as if he’s doing them a favor instead of doing his job. People are rushing to the store to collect as much toilet paper and hand sanitizer as they can because they’re panicking. Heck, most of the students I’ve talked to don’t qualify for unemployment or the aid being provided by the government. They don’t know if they’re going to be able to pay their bills in a month. People are scared, but more importantly, they are angry. The thing to remember about anger is that it can easily transform into motivation.

Despite the current political atmosphere and the knowledge that each day a new disaster seems to strike, I’ve never seen anyone as motivated to get involved and help as the people I’m about to graduate with. I’m not saying that we’ll solve the world’s problems, but I am saying that we are ready to get involved and work with the generations that have looked down on us for so long. We want to do our part.

My friends in the nursing program have lost the opportunity to do their final round of clinicals. They have the knowledge necessary to get involved in the medical community and help, but because they haven’t graduated yet, they aren’t able to apply any of it. Instead of being afraid of what they see happening in hospitals, they’re counting down the days until they’re able to get involved in the process of saving lives.

The education majors are still out in the world student teaching, doing everything they can to provide for their students from a virtual standpoint. I have friends who have been teaching public speaking classes online or reading children’s books to their first graders every day of the week. They’re all eager to continue teaching their students, no matter how far away they may be.

My friends involved in the arts have actively been working to create new content. Whether they’re artists, actors, or writers, what they’re creating is of value. If you don’t think so, you can go ahead and unplug your television, pack up any books you might be reading and delete any music you have on your phone.

I could keep going, but I think that my point is clear. Regardless of what anyone says about us being selfish or not caring about the world around us, the majority of us do care and we’re ready to do whatever is necessary to show it— even if it means that we’re staying home trying to find ways to pay our bills. People have been judging our generation for not doing anything to help, but the reality is that we haven’t really had a chance to make our mark yet. We’re just entering the real world, but I know without a doubt we’re ready to do our part.

Our generation grew up being taught that we needed to study hard so that we could get into a good college. The people who worked the hardest would succeed and if anyone failed, it was because they didn’t put in enough effort. Though we were taught that competition was the way to success, we learned something vastly different. We learned to stand together.  Our generation knows that problems don’t get solved when people compete with one another. Problems get solved when people collaborate and try to overcome obstacles and make sure that everyone, regardless of their background, has access to the resources that they need.

Throughout this entire experience, the mentality among graduating seniors has been that we’re in this together. Whether it’s comforting classmates through all of the losses or finding ways to keep motivated for class, we have been supporting one another.

It’s that support that gives me hope. As hard as things are right now, we’re going to come out better and stronger on the other side. We will be able to make a positive difference in the world because we know what it feels like to have everything crash down in front of us. Even though we’re all isolated in our houses, we stand together. None of us are alone.

Elizabeth Schoof is a Senior at Aquinas College majoring in English with a Writing Emphasis and Communication. She loves writing, movies, and laughing at her own jokes.