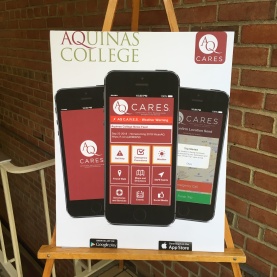 Campus Safety is making new efforts to engage students through AQ C.A.R.E.S., an Aquinas College app which offers a range of services.

These services include weather updates, emergency procedures, campus events and maintenance reports, to name a few.

Campus Safety is making an effort to raise student engagement and awareness. While RAVE was a step in the right direction, AQ C.A.R.E.S. is something else entirely. Cardenas considers this app to be something more tangible, referring to it as “the actual app to put in your hands.”

Through its many services, AQ C.A.R.E.S. also aims to put safety into the hands of the students who use it.

“The person who is most responsible for your safety and well-being is you,” said Cardenas.

There are now more ways to be safe on campus. A feature of the app is the Friend Walk, which allows you to share your location with a friend as you travel across campus. If anything unusual happens, either of you has the option to call Campus Safety or 911.

Another important feature is the SAFE Saint Walk. Rather than sharing where you are with a friend, Campus Safety is allowed to see your location, and monitors your walk until you reach your destination.

The goal of these features is not to replace Campus Safety escorts, which will still be fully available. The SAFE Saint Walk and Friend Walk are merely additional options for students.

The practical planning for AQ C.A.R.E.S. began with an offer from the company AppArmor to create a safety-oriented app for Aquinas. Gary Szotko took the lead on the project, putting together the app’s content.

The app was fully functional in a matter of months, and was officially released on Sept. 30. According to Campus Safety, AQ C.A.R.E.S. is one-of-a-kind.

“We’re the first Michigan college to have this type of system,” said Cardenas.

AQ C.A.R.E.S. amounts to more than a safety app; it is intended to educate users. One goal of the project is for students to really explore everything that is offered, including a variety of preventative safety measures.

“What we really want is for the Aquinas College community to be more aware of its surroundings,” said Cardenas.

The name AQ C.A.R.E.S. was selected through a student competition. Students were allowed to submit suggestions, and the final selection was based on social media likes. AQ C.A.R.E.S. was submitted by Aquinas Junior Cassie Herrington.

The name is an acronym for the options provided by the app: Campus News, Alerts, Response Guides, Emergencies and Services.

Students are encouraged to use the app for all of these services. It is intended to provide reputable Aquinas news and weather reports, all vetted by Campus Safety.

“Look to the AQ C.A.R.E.S. page to get the real information,” said Cardenas.

Any problems with or suggestions for the app can be directed to Campus Safety.