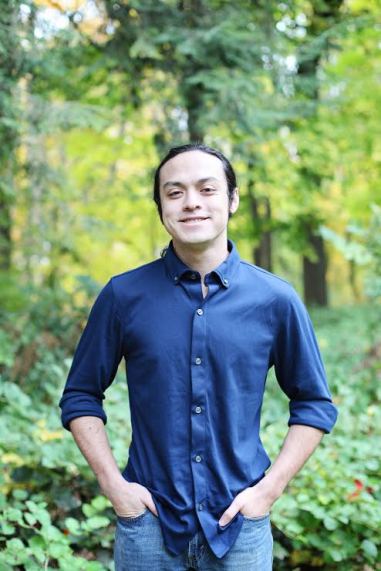 Nate Gimby has returned to Aquinas as Program Coordinator for the Campus Life Office. Gimby is not a new face to the AQ community; he graduated in 2016 from AQ with a dual major in Political Science and Communication.

During his time at AQ, Gimby was very involved on-campus. Aside from his roles within Campus Life, he took part in Student Senate, the Philosophy Club, and Model United Nations. Gimby also studied abroad in Ireland and was a staff writer for The Saint. With Campus Life, Gimby served as one of three Orientation Interns for two summers. In this role, he helped plan the three day orientation that all “new to AQ” students go through.

Gimby describes his Program Coordinator role as “a lot of things rolled into one.” Some of his responsibilities include managing Campus Life student workers, providing general support for student organizations, planning events for Campus Life, and being one of the emergency coordinators for The Moose. His role involves working with students, and he is looking forward to being able to do just that.

“I look forward to being available for students,” Gimby said.

The development of leadership skills is one of the highlights from the time he spent working in the Campus Life Office as an AQ student. Gimby looks forward to helping student and club workers grow and develop, just as he was able to do.

“It was exciting as a student worker to develop leadership skills.”

Currently, Gimby is still getting settled and his hours haven’t quite been figured out yet. For now, he is especially available on Tuesdays in the Campus Life Office (located in the Cook Carriage House) during the middle of the day.

The Campus Life Team is excited to have Gimby back at Aquinas, and he is elated to be back as well.

“I love the campus. It’s nice to work at a place where you walk outside and there’s nature.”